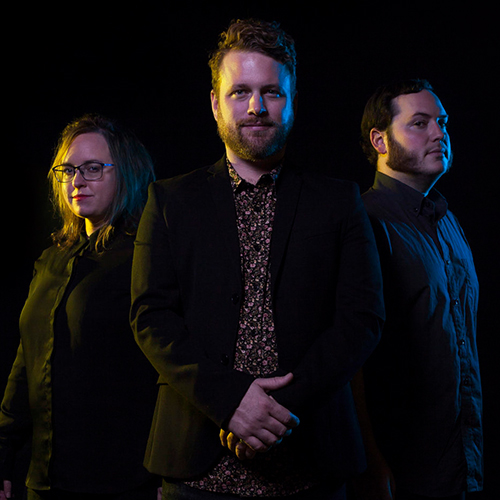 The innovative and progressive Jon Stickely Trio crafts genre-defying acoustic music that is intelligent, joyful and unconventional. The Asheville, NC-based group has now teamed with Organic Records to release Scripting the Flip on April 3, 2020. The album is now available for pre-order.

Rooted in the traditions of bluegrass but combining gypsy jazz, avant garde, rock and even EDM music into a powerfully unique sound of its own, the Trio—which features Jon Stickley on guitar, Lyndsay Pruett on violin and Hunter Deacon on drums—has become festival and music hall performing favorites. A rapidly growing and increasingly devoted fan base has resulted from their national touring schedule and in this, the Trio’s fifth album. 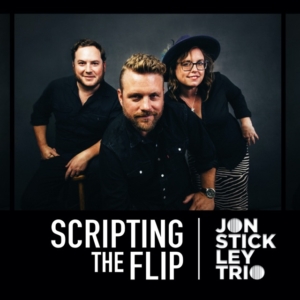 A series of singles preceding Scripting the Flip’s release serve as focus tracks and show the band’s ability to weave a multitude of strands into one coherent, distinctive fabric.

The first, “Animate Object,” (STREAM/BUY) is an intelligent blend of jazz, latin, and dance music. It’s unconventional and alluring, making it a perfect example of the group’s twist on acoustic-based music. “The world is a swirling collection of objects passing through space and time. As humans, we have our own orbits that intersect with others as we live in the world. ‘Animate Object’ explores the idea of different musical orbits coming together to create something unexpected,” says Stickley.

Inspired by the late night festival sets the Trio loves to play, where it often takes on a life of its own, “Don’t Slip” (STREAM/BUY) is the group’s dance anthem. “Overall this song is one of the most ‘us’ tracks we’ve ever recorded,” says Stickley. “It’s about the freedom to explore and get lost in the groove, and when it takes over, make sure not to slip!”

The third is a characteristically witty yet deeply rooted take on a bluegrass classic: legendary fiddler Kenny Baker’s “Bluegrass in the Backwoods” (STREAM/BUY). Stickley adds, “The tune captures one of the coolest aspects of bluegrass: its ability to naturally incorporate other genres and styles. It’s easy to hear the influences of gypsy jazz, and even bebop in the phasing of the melody.”

About the Jon Stickley Trio | Jon Stickley Trio is a genre-defying and cinematic instrumental trio, whose deep grooves, innovative flatpicking, and sultry-spacy violin move the listener’s head, heart, and feet. “It’s not your father’s acoustic-guitar music—although Stickley’s pop showed him his first chords when he was 12 years old. Instead, Stickley’s Martin churns out a mixture of bluegrass, Chuck Berry, metal, prog, grunge, and assorted other genres—all thoroughly integrated into a personal style,” writes Guitar Player Magazine. With inspiration ranging from Green Day to Duran Duran to Tony Rice to Nirvana, Grateful Dead, David Grisman and beyond, the Trio, which features violinist Lyndsay Pruett and drummer Hunter Deacon, is making waves with their unique sound. Along with releasing two full length albums and one EP in the past few years, the Trio has zig-zagged the nation, though they still call Asheville, NC home. Stickley says, “The Trio feels fresher and hotter than ever, we’ve hit our stride in terms of creating tunes that are uniquely us and that’s a really exciting place to be musically.”