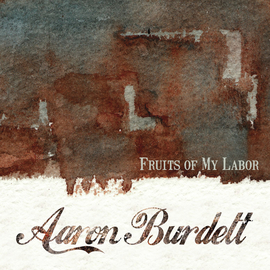 Aaron Burdett & Organic Records to release Fruits of My Labor

Aaron Burdett understands the power of a song and the weight of its words. He knows it has the power to transform any listener for, as his lyrics have said, “three or four minutes at a time … Just long enough time to rise up and leave it all behind.” Experiencing any three, four or even five minutes of Burdett’s new release Fruits of My Labor elicits that transformative power.

Fruits of My Labor is a result of an artist that has refined his work through multiple independent recordings, live performances and award-winning songwriting efforts.

Although heavily acoustic, the album has a groove that makes each tune accessible, almost classic.

The leadoff track “Something Out Of Nothing” is epic and sentimental, reflective and eager. It introduces first time listeners to Burdett’s will to inspire with powerful delivery and themes. The album continues with the title track that tells an American story of the faithfulness of a working class hero who you root for despite the desperateness of the tone. (Think Mellencamp, Little Pink Houses)

“The Love We Got” adds tempo diversity while continuing a pull on heartstrings. “Water in the Well” returns to a groove that gives a continued sense of the style of both artist and album.

Burdett is best described as an Americana singer/songwriter, but his North Carolina mountain roots flavor his overall sound and emerge more and more as the album continues with banjo and mandolin tones joining steel guitar and acoustic flat picking.

With Burdett’s vocals in the Van Morrison, John Hiatt, and even Jack Johnson camp, critics are quick to attribute his greatest impact to his authentic singing voice. However, the combination of his prolific writing, arranging, and performance proves that he is a significant artist on every level.

This is Burdett’s fifth studio release and his first on Organic Records. With time well spent nourishing the fruits of his labor, Burdett is ready to reap the harvest.

Available on February 18, 2014 at all major digital service providers.