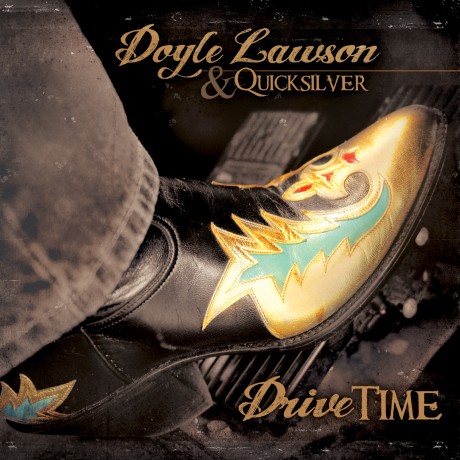 Innovating Bluegrass band Doyle Lawson & Quicksilver again breaks the mold of convention with their latest album Drive Time, set to release on March 29, 2011 on the Mountain Home Music label, a division of Crossroads Entertainment & Marketing, Inc.  The album is available in a limited-run vinyl edition as well as CD and digital downloads.

The very first cut on the album enters new territory for Lawson – a vibrant version of Paul Simon’s “Gone At Last,” of which Simon says, “Doyle Lawson & Quicksilver have done one of the best covers I have ever heard of a song of mine. It’s definitely the fastest.”

The entire recording contains explorative arrangements that stretch the band’s traditional bluegrass sound, including an original country/bluegrass mix of “Love On Arrival” (debut single) and “Country Store,” and the intricate genre-bending instrumental “Greenbriar Hop.” A compelling remake of “Precious Memories” is the sixth track on the album and all the tracks are driven by the flawless musicianship and heart-stopping vocals for which Lawson is known.

Lawson adds, “I’m so excited about this new release. It is a unique and fresh new sound for us. I love this combination of songs because I believe each one flows into the next, complementing the song before it.”

Following numerous Bluegrass awards, a National Endowment for the Arts award, and multiple Grammy nominations, Lawson’s stretch into new territory with Drive Time is evidenced with corresponding appearances on Paul Simon’s April release So Beautiful or So What and the new Mark Twain: Words and Music CD along with other notables Clint Eastwood, Garrison Keillor, Emmylou Harris, Sheryl Crow, and Vince Gill.

Speaking of Drive Time, Kyle Cantrell, programmer for Sirius/XM Satellite’s Bluegrass Junction, says, “You hear the fullness of the Doyle Lawson & Quicksilver experience. The soaring, perfectly delivered, precise harmonies, the impeccable musicianship, and song selection that’s always one step ahead of the rest, make this perhaps the best work Doyle has done to date.”

Doyle Lawson, who, after stints with Jimmy Martin, J.D. Crowe, and the County Gentlemen, founded Doyle Lawson & Quicksilver in April 1979. He has received 14 IBMA (International Bluegrass Music Association) Awards, including seven Vocal Group of the Year and three Song of the Year awards, and more than 30 SPBGMA (Society for the Preservation of Bluegrass Music of America) Awards. He has also been nominated for four Grammy Awards and five Dove Awards. In 2006, he received a National Heritage Fellowship from the National Endowment for the Arts.

Mountain Home, a division of Crossroads Marketing and Entertainment Inc., is one of the top Bluegrass labels in the business, representing such artists as Doyle Lawson & Quicksilver, The Boxcars, Balsam Range, and Darin and Brooke Aldridge. Established in 1993, Crossroads is a market leader in the Bluegrass, Southern Gospel, and Performance Track fields.

Syntax Distribution, a division of Quality Junk, is one of the top independent digital distributors and aggregators representing more than 25,000 songs. Syntax handles many of the top independent artists such as David and Tamela Mann of Tyler Perry’s “Meet The Browns” and Disney’s “Next Big Thing” winner, Jasmine. Their record label clientele include Central South, Crossroads Music, and iShine, among others. To learn more, visit syntaxcreative.com.