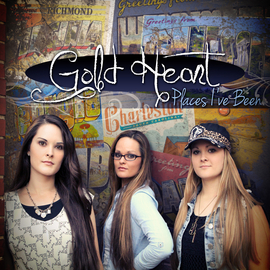 Gold Heart, featuring the Gold sisters Tori (mandolin), Jocey (guitar), and Shelby (fiddle) have been touring world wide and astounding audiences with their fun personalities, intense harmonies and brilliant musicianship since 2005. With nearly ten years on the bluegrass scene, hundreds of live performances and now four albums under their belt, Gold Heart is elated to join Mountain Fever Records.

Of the trio, Keith Lawrence of Bluegrass Notes stated, “If angels sing bluegrass, this is what it sounds like.” These young artists are expert songwriters, with Jocey and Shelby contributing the majority of the band’s impressive material. At age fifteen, Jocey was one of three finalists of 983 contestants in the 2008 Chris Austin Songwriters Competition (bluegrass category) at MerleFest. The work of the sisters can be heard on their previous recordings, My Sisters and Me, Never Let Go and Journey to Heaven’s Bright Shore. Rounding out the band are the Gold sisters’ father, Trent Gold on bass, and their brother, Kai Gold on banjo. However, on Places I’ve Been, the trio looked to the album’s producer and seasoned player, Ron Stewart, to lend his banjo talents.

“Ain’t That Crazy,” written by Jocey Gold is the first single from Places I’ve been, the band’s debut album on Mountain Fever Records. It features Jocey on lead vocals with the very capable support of Shelby on tenor and Tori on baritone. The song is progressively contemporary in flavor with the band’s raw and edgy approach, but if you listen close, the lyrics speak of a very innocent time in a child’s life when playing make believe means you can be just about anything you want and it really “Ain’t That Crazy.”

“‘Ain’t That Crazy’ was written when I was just sixteen,” recalls Jocey. “I was asked by a Nashville producer to write a song for one of his artists. Sipping coffee, strummin’ my guitar and daydreaming about how much fun growing up was, ‘Ain’t That Crazy’ was written. The lyrics flowed so naturally with the melody I was feeling. They went hand in hand, just like make believe in the life of a child.

As the song came together, I realized I had just told a part of my own childhood story. It unfolded in two verses, a chorus and an energetic melody. The song was an instant favorite with our band and before I knew it, my intention to pitch the song had changed. This one was a keeper!”

Download “Ain’t That Crazy” and Pre-Order Places I’ve Been on iTunes, Amazon, or Google Play.