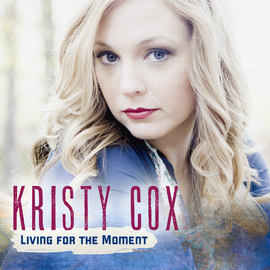 The “Land Down Under” has given more to the world than just a fine actor named Hugh Jackman. It was Aussie car company that fitted the first radio into a car in 1924. And now, the ride will be even sweeter with the lovely strains of another Aussie pouring warmly through the speakers.

Australian Bluegrass star, Kristy Cox, is a shining new light on the American music scene with her debut U.S. release Living for the Moment.

With multiple Australian Country Music awards to her credit, including the 2013 Australian Independent Artist of the Year, Kristy has found a new home in Nashville, TN and on the Pisgah Ridge Records label.

Produced by award-winning Nashville-based songwriter Jerry Salley,Living for the Moment includes heavyweight songwriters such as Jim McBride and Gerald Crabb, as well as Kristy’s own co-writing efforts with Johnny Duke, Stephen Mougin, and Jerry Salley.

“I have had huge support from the Australian Country Music scene,” Kristy says. “Now, I’m ready to spread my wings even further and release my first project in the states. I am very excited about what the future holds.”

Alongside powerhouse songs, Living for the Moment is delivered by an all-star group of award-winning musicians including Mike Bub, Stephen Mougin, Steve Sutton, David Johnson and Darren Nicholson. The combination of these songs, musicians and Kristy’s stunning vocals make for one stellar recording that will show the world what Australia has already embraced.