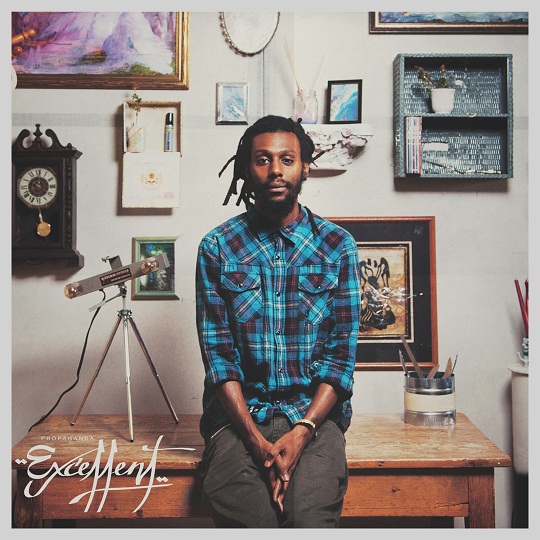 Dynamic, soulful, experimental, and clever, all focused on the heart of a person. With an uncompromising message intertwined with hot rhythms and beats, Los Angeles based, Propaganda, lyrically puts together potent relevant music that reaches across the spectrum of youth and pop culture. Bringing with him years of classroom teaching and community service experience, he is eloquently bold in the message of each song and never shies away from a strong poetic element in his music. His Subject matter ranges from staying accountable God as well as standing up boldly for one’s faith both in word and in one’s life. Not to mention aggressive battle rap and political awareness

Opening up for and performing with such groups as De La Soul, The Visionaries, Lightheaded, Ahmad & 4th Avenue Jones, LA Symphony and touring with none other than the Blastmaster KRS ONE, Propaganda is no stranger to live shows. Music lovers all over the country proclaim, after a Propaganda show, “He Sounds like no one else out there. Nobody performs like him! His sound and style is completely his own!” Not to mention being highly respected in the LA underground scene, a familiar face in places like A Mic and Dim lights and the Famous collective called Foundation, he is also one of the main topics of chat rooms on many Hip-Hop related sites. “Props” has gained a national and international following which landed him in London, Cameroon television and radio and Nigeria to name a few. After years of training being the youngest member of the Los Angeles based mega crew The Tunnel Rats, he now boasts full-length albums, two feature films, countless cameo appearances and a chance to write with and perform with Krs One.

From aggressive Battle raps over Norma Jean, Face to Face and Static Lullaby guitar licks, to smooth introspective soul rhythms, to the head nodding beats and rhymes California is known for, Propaganda is the total package. Do not let His name fool you. He is not simply Gossip and rumors. He is the truth. Come and see