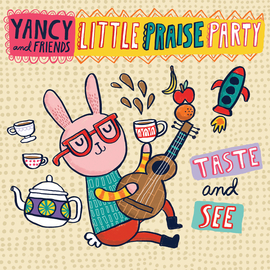 Yancy’s Little Praise Party series engages kids from the very start with non-stop sing-along fun for the entire family. In addition to CDs, each project in the series has a companion DVD filled with exciting animation with on-screen lyrics to help visualize the words and stories portrayed within the songs. As a mom herself, Yancy definitely knows what it takes to keep kids simultaneously entertained and uplifted. There’s even an entire Spanish-language collection of Little Praise Party favorites called Pequeña Fiesta de Alabanza, which features vocal production from Jaci Velasquez and Salvador’s Nic Gonzales.

“The new Little Praise Party album is called Taste and See, which is a major point on my heart right now,” says Yancy. “I know the power of music and love the fact that the songs I write have the potential to plant seeds in the hearts of people. I want this generation to taste and see that the Lord is good, and if they do that at an early age, I believe they’ll be able to have the relationship they need to have with the Lord so it doesn’t turn into one of those sad stories you hear about people turning their backs on their faith later in life.”

The new album features guest appearances by Chris Lockwood (formerly of 33 Miles), Erskin Anavitarte and renowned children’s ministry leader Jim Wideman (Yancy’s father), who has appeared on all of the Little Praise Party releases. The popular Little Praise Party app (which features new videos each month in English and Spanish), available in both iOS & Android formats, will also be adding new videos from the latest project.

For church and classroom use, there is also a Church DVD available that includes all 15 songs plus the soundtracks, mp4 files and a group viewing license.

For more than a decade, Yancy has been making a wide range of music that has found an audience with Christian music fans of all ages. Upon arriving in Nashville, Yancy quickly became one of Music City’s most sought after songwriters, co-writing songs with Third Day frontman Mac Powell, penning the Jaci Velasquez hit “Something Beautiful” and the chart-topping, ASCAP Award-winning song “I Don’t Want To Go” for Avalon’s Grammy and Dove nominated Oxygen album. As an artist, Yancy has released radio-friendly pop/rock albums and multiple projects for kids and young adults, while sharing the stage with Michael W. Smith, Newsboys, Plumb and many more.

Yancy Ministries is rapidly becoming a premiere destination for uplifting entertainment and church resources used all across the globe. Above and beyond the worldwide distribution of the Little Praise Party CD/DVDs, Yancy pens a monthly column for KidzMatter Magazine, and has written and produced the music and videos for Standard Publishing’s Vacation Bible School curriculum since 2012, which also features author and missionary Beth Guckenberger of Back2Back Ministries and reaches over 1,000,000 kids each year.

Yancy continues to tour year-round, from family concerts to confereces to leading worship for youngsters at mega-churches such as Hillsong Church (Sydney), Lakewood Church (Houston), Prestonwood Baptist (Dallas) and Northpoint Community Church (Atlanta), among others.

“Yancy Ministries exists to make Jesus loud, whether that’s through songs, videos, devotionals, training or family concerts,” explains Yancy. “A love and passion for Jesus is at the core of everything we do. We want to encourage whole families to love God with all their heart, spending time singing God’s praises, and celebrating all that He has done.”