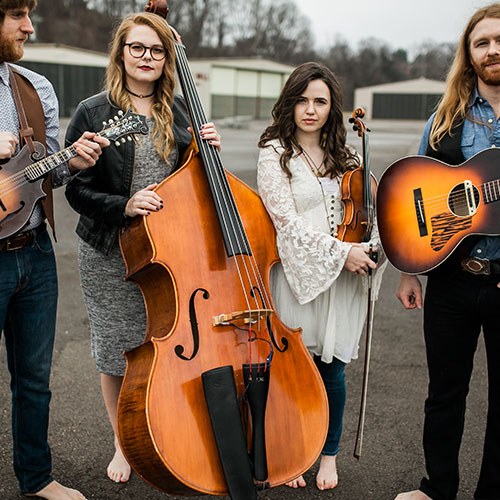 Syntax Creative is excited to be teaming with Bonfire Music Company and its upcoming release of The Barefoot Movement‘s (pictured) brand new single, “Early in the Morning.”

“Early in the Morning” is set to release on November 22, 2019 and will be available on digital service providers everywhere. CLICK HERE to pre-save/pre-order (or STREAM/BUY after Nov. 21).

The song is described as a chain gang song from Parchman Farm (Mississippi State Penitentiary) and was originally recorded by Alan Lomax in 1947. Last year, the group performed this song at the Red Clay Music Foundry for Eddie Owen Presents. Check out the live video of that performance below:

About The Barefoot Movement | Heartfelt, energetic, and down home. Heralded by CMT Edge as “one of the most promising bands on the bluegrass scene,” the music of the Nashville based group The Barefoot Movement is as down to earth as their intention for members of their audience: sit back, relax, take your shoes off, and stay a while. All the worries and frustrations of the world melt away as this charming, acoustic band takes listeners back to a simpler place and time. Whether you’re seeking emotional ballads or rip-roaring barn-burners, you can expect a collection of music that offers something for everyone. With two full length albums, an EP of traditional music, several cross-country tours, and appearances at some of the top bluegrass festivals in the United States already under their belt, the possibilities for this act are endless. The group has enjoyed almost non-stop touring including a trip to Burkina Faso, Africa where they were guests of the American Embassy, and in September of 2014, they received a Momentum Award, naming them “Band of the Year” by the International Bluegrass Music Association.

Their show is as fun to watch as it is to hear. The smiles on the faces of the band are obvious displays of the joy and excitement they feel when performing and the audience shares in the fun. With effortlessly executed transitions, the pacing between the softer and more vigorous numbers constantly has fans on the edge of their seats.

The “movement” can be traced back to the teen years of singer-songwriter and fiddler Noah Wall, of Oxford, NC. Just as she had begun penning her first compositions, she met mandolinist Tommy Norris their senior year of high school. Convinced of their musical chemistry and driven by mutual ambition, they continued to build the band from the ground up throughout their college careers… | READ FULL BIO at Bonfire Music Company