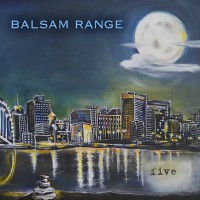 It was a big night for Balsam Range at the 2014 International Bluegrass Music Association awards, which were announced during a red carpet event at the annual World of Bluegrass convention in Raleigh, NC.

Singer/Fiddler Buddy Melton was named Male Vocalist of the Year and shared his heartfelt gratitude from the stage. Balsam Range was honored as Vocal Group of the Year, and in the final award of the night, this band of friends from North Carolina’s Haywood County was honored with the coveted IBMA Entertainer of the Year Award.

Balsam Range had just performed “Moon Over Memphis” and Caleb was backstage talking guitars with fellow-artist, Del McCoury. Guitars are, after all, a favorite topic for Smith, a luthier who makes Caleb Smith Guitars. When the Entertainer of the Year award was announced, McCoury had to interrupt Smith, saying “Son, I think they just said your name.” No fret, Caleb made it to the stage in time to accept the award alongside Tim Surrett, Buddy Melton, Marc Pruett and Darren Nicholson.

Label-mates at Mountain Home Music Company also received IBMA awards. Adam Steffey of The Boxcars was named Mandolin Player of the Year, and Flatt Lonesome won the Emerging Artist of the Year award. At an earlier luncheon program, Tim Surrett of Balsam Range was honored with the Mentor Award (one of a series of special honors called Momentum Awards) for his inspiration and work with young and developing artists.

IBMA Awards are decided by a vote of the professional membership of the International Bluegrass Music Association (IBMA), the trade association for the bluegrass music industry. The IBMA Awards Show was broadcast live on SiriusXM Satellite Radio (Bluegrass Junction), and streamed for viewing by Music City Roots.