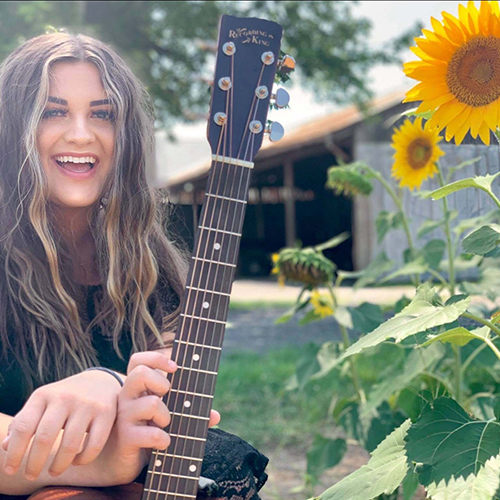 If there’s one word that explains why Jaelee Roberts is signing an exclusive recording contract with Mountain Home Music Company, it’s family. The daughter of Danny Roberts, the mandolin-playing co-founder of Mountain Home’s hit-making bluegrass group, The Grascals, Jaelee was introduced to the label by her parents, but with today’s announcement, she’s replacing that family connection with her own, independent membership in the Mountain Home family of artists.

Roberts says, “Some of my biggest musical influences have been or are on Mountain Home, and for me to be among them almost doesn’t seem real. There is always so much amazing music coming from this label, and having the opportunity to make my own music is what I’ve hoped for and dreamed about. I’m so blessed to now be able to call myself a Mountain Home recording artist and to be part of the MH family—and it really is family.”

It wasn’t inevitable that Jaelee would take to music, but with lifelong musicians and industry professionals for parents, the opportunities to learn from—and alongside—musical heroes were frequent; by the time she entered her teens, she’d recorded as a singer not only with her father, but with the Tom T. and Dixie Hall-backed Daughters of Bluegrass, and before she completed high school, she’d been chosen in two consecutive years as a vocal track participant in the industry-leading GRAMMY Camp. More recently, she was selected to appear in this year’s juried IBMA Songwriter Showcase.

Today, the young singer-songwriter is enrolled in nearby Middle Tennessee State University’s renowned songwriting and music business programs as she immerses herself in the dynamic community of young bluegrass, country and roots music musicians emerging in Nashville. “I see myself as being a friend and ‘cheerleader’ to others,” she says. “I have been around bluegrass music all of my life and have grown up with so many people around my age that it seriously feels like we’re a huge family. I learn from my peers and I feel like we all learn from each other; it’s really quite cool to see how many of the younger generation are sticking with the bluegrass and classic country roots alongside those who are going for more ‘out of the box’ sounds. I love being part of this music, and I’m so blessed to be surrounded by so many friends who are so talented, and share the love of music just like I do!”

“Jaelee has a rich and smooth quality to her voice that’s entirely her own and contains the wholehearted love she has for music,” says Mountain Home’s Francesca Huffman. “It’s stirring to hear music put together for the sheer joy of participating in it, whether in its creation or performance, and this notion is nearly tangible in her voice, music and presence. We’re elated to officially welcome her to the Mountain Home family!”