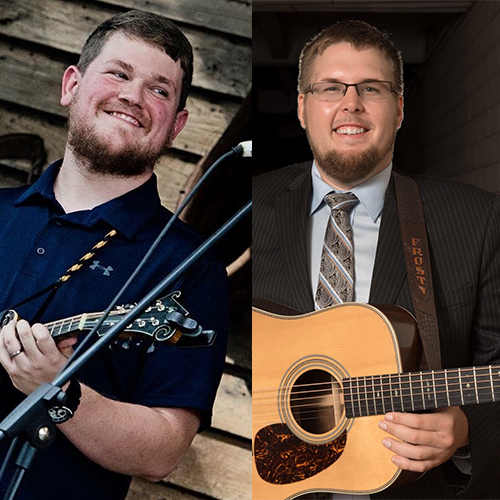 Mountain Fever Records is pleased to welcome a fresh combination to the bluegrass music family. Boone & Foster is comprised of Troy Boone on mandolin and vocals and Aaron “Frosty” Foster on guitar. Joining them for a great recorded project soon on the way is Aaron Ramsey on bass, Daniel Greeson with tenor vocals and fiddle and Brady Wallen on banjo. They are recording their most requested tunes which will be known as Smokey Mountain Favorites.

Mountain Fever president Mark Hodges states, “I jumped at the chance to get these guys on board with us. They’re an integral part of the Amanda Cook band and in this configuration they also deliver some pretty tight bluegrass, and that’s what we need more of.”

About Boone & Foster | Troy Boone grew up in a musical family with a banjo and guitar in his hands. In high school his brother gave him an F style mandolin, which became his primary instrument as he headed into college at East Tennessee State University. In 2016 he joined touring outfit Sideline, and in 2019 earned his first IBMA award for his playing and lead vocal on “Thunder Dan” with the band. Currently he and his wife Carolyne get to perform together touring with Amanda Cook. He also stays busy teaching music and finishing his bachelor’s degree in Audio Production from Full Sail University. Boone frequently plays at the Ole Smoky Moonshine Distillery, which has inspired him to record fan favorites with that group of musicians.

Aaron Foster is a 2017 graduate of East Tennessee Sate University where he earned a minor in Bluegrass, Old Time, & Country Music Studies to pair with an Interdisciplinary Studies degree. Currently he stays busy performing with his band Dreamcatcher at Ole Smokey Moonshine Distillery, holding lead guitar position with the Amanda Cook Band, and is the Public Relations & Marketing Coordinator for the department of Appalachian Studies at East Tenn. State University. Foster, originally from New York State, received his first music lessons from his father, and was soon participating in the music scene in New England. At the age of 10 his grandparents, with the help of their friend Eric Gibson of the super group The Gibson Brothers, helped grant him his Christmas wish of receiving his first guitar. His smile, energy and enthusiasm are contagious.