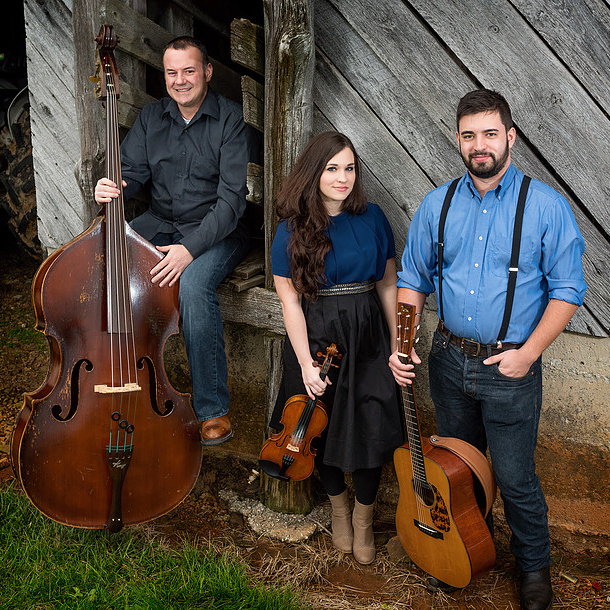 Founded in 2008, Kentucky Mountain Trio’s sound stays true to their eastern Kentucky roots, yet they bring their own contemporary twist to whatever they do. At the forefront, lead vocalist and fiddle player, Heidi Greer, accompanied by her husband, Ryan, who plays guitar and sings harmony, put their heart and soul into their music. Heidi’s breathtaking vocals have been compared to that of Sonya Isaacs and Allison Krauss. And while that certainly puts her in esteemed vocal company, the nuances and timbre in her note selection is distinctly her own. Rounding out the trio are Matt Cromer on Dobro,  Brian Davidson on bass and Nathan Adcock on Cajón.  The combination makes for a very earthy band voice that blends perfectly.

“This past February while at SPBGMA in Nashville, I was coming back upstairs to our showcase rooms and a man I passed said, ‘You need to get up there quick,'” explains Mark Hodges of Mountain Fever Records.  “So I picked up my pace and when I arrived, I heard the last chorus of the last song of  performance by Kentucky Mountain Trio. Everyone kept telling me I should have been there earlier and that I really missed out. So I spoke with Heidi and Ryan afterwards and when I arrived at my office a few days later, I began researching their music. It didn’t take long to figure out why people were so moved by this group. So, I contacted them and we worked things out rather quickly. All of us at Mountain Fever are very excited about what the future is sure to hold for these fine young people. Their music is simple and direct but accentuates the emotion and heart-felt presentation of this young girl’s heart-stopping vocal delivery, supported by a wonderful group of musicians.”

Kentucky Mountain Trio has begun working on their debut album for Mountain Fever that will include 12 songs and should release early Fall 2016.