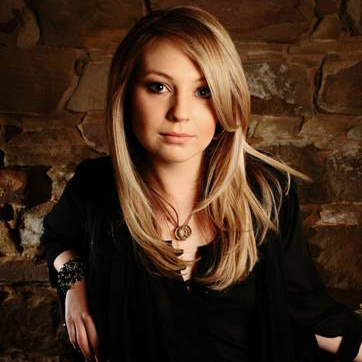 Kristy has been performing in the U.S., Europe and her Australian homeland for years, resulting in #1 hits on Australian radio charts as well as winning several Victorian & National Country Music Awards. With the support of her new Pisgah Ridge family, she is focusing on the U.S. with plans for a new album and an upcoming new tour.

Fans at the recent 2013 International Bluegrass Music conference got a taste of the excitement when Kristy showcased at the Raleigh, NC event.

The young singer/songwriter already has five Victorian & National Country Music Awards to her credit, including Victorian Entertainer of the Year. She has also been a Tamworth Starmaker finalist and APRA Professional Development Awards finalist for Country Songwriter in 2011.

Kristy Cox is currently at the Crossroads studios in Arden, NC working on her forthcoming project with producer Jerry Salley. The album is set for early 2014 release on the Pisgah Ridge label. To learn more, visit: www.kristycox.com.