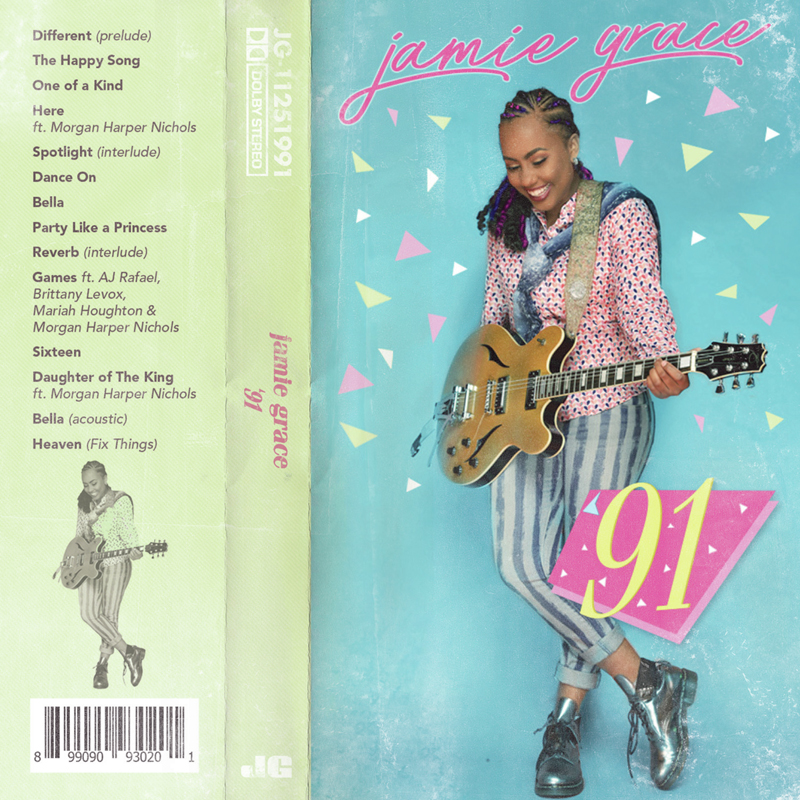 Syntax Creative is excited to announce a new deal with Good Eye Management and sisters Jamie Grace and Morgan Harper Nichols, recording artists who were formerly signed to TobyMac’s Gotee Records. Grace, a Dove Award-winner and two-time Grammy nominee, independently released her first project since 2014 today titled ‘91, which is now available at all digital outlets.

“I’m excited for fans to hear my new music,” Grace said. “I definitely believe it’s some of my best work yet.”

“Both of these sisters are incredibly talented,” Syntax CEO Tim Trudeau said. “As evidenced on the new project from Jamie Grace which blends elements of Country, Urban, Christian and Pop into a very enjoyable listening experience.”

Grace’s last LP, Ready to Fly, peaked at No. 32 on the Billboard 200 and No. 3 on its Christian Albums chart. In 2014, she became one of just four female Christian artists ever to have a single go Gold when listeners downloaded “Hold Me” featuring TobyMac 500,000 times.

Nichols, who Grace featured on three tracks for ‘91, is also currently working on her next album. She and Grace form a country-influenced pop duo together called Harper Still.

“Syntax Creative is the right partner to help Jamie and Morgan successfully navigate the digital space,” Mona Harper, President of Good Eye Management said. “We have high expectations for this new season of independence and believe Trudeau and his team want to see us succeed in it.”

“With the recent move to California for the sisters and their team, working together will be even easier,” Trudeau said.

Jamie Grace is a two-time Grammy-nominated singer-songwriter, musician and actress based in Los Angeles, California. At just 25 years old, the now independent artist has four No. 1 radio singles, many nominations as a singer/songwriter and millions of views on her weekly Youtube videos. When she isn’t on tour or in the studio, Jamie Grace co-hosts the food and lifestyle podcast On The Plate Again with her sister Morgan, The Jamie Grace Show, a web show and podcast and the podcast God Girl’s Club, a weekly mini-devotional for young girls and their families. In the summer of 2017, Grace launched LoveWill.net, an extension of The Jamie Grace Foundation, as a way to advocate for children in foster care. To learn more, visit: http://jamiegrace.com/

Morgan Harper Nichols is an award-winning songwriter, singer, author, artist, speaker, poet and, all together, a storyteller. Morgan’s songs have garnered over 2.6 million views on YouTube, and she has been featured in numerous publications, magazines and broadcasts including FOX Good Day Atlanta, Atlanta Journal Constitution, CCM Magazine and others. Her debut music project, produced by Paul Mabury, features collaborations with Jamie Grace, Mac Powell (Third Day) and All Sons and Daughters. Nichols has sold one-of-a-kind hand painted pieces of her artwork all over the world in the form of inspiration cards and gives one away for every one sold. To learn more, visit: http://themhn.co/

Good Eye Management is a coaching and styling firm for artists, athletes and other public figures with over 30 years of experience in the entertainment industry and offices in Beverly Hills and Atlanta. They have represented Grammy, Billboard, Dove and KLove Fan Awards-nominated artists and an Olympic Gold Medalist. To learn more, visit: http://camps.goodeyemanagement.com/