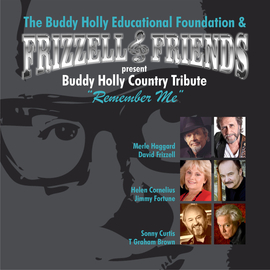 First on deck for distribution is The Buddy Holly Country Tribute: Remember Me, produced by Frizzell in support of the The Buddy Holly Educational Foundation. This special musical collection honors the indelible legacy of Buddy Holly, whose all too brief career nonetheless rendered a breadth of material Holly that continues to make a lasting impression on popular music in multiple genres. Set for release on Sept. 7, 2014, (on what would have been Holly’s 78th Birthday), and is is a benefit for the Buddy Holly Educational Foundation, a charitable organization focused on music education, co-founded by Buddy’s widow, Maria Elena Holly. This project is available for pre-order at iTunes now.

“I’m a huge Buddy Holly fan,” Frizzell says. “We all knew we were creating something special and I’m so glad to have the Syntax Creative team on-board to share this music with the world.”

“I’m excited to count Nashville America Records among our growing roster of distributed labels,” Timothy Trudeau, CEO of Syntax Creative says. “David Frizzell and his friends have crafted a solid tribute that both fans of Buddy Holly and Country will be sure to enjoy.”

David Frizzell is one of the greatest voices in County Music. His voice has a haunting resemblance to his older brother, the ultimate stylist, Lefty Frizzell, about whom David authored a biography in 2011. (The book was named by CMT as one of the Best Music Books of the year.)

While still a teen, David began touring with his legendary brother and was soon recording country and rockabilly albums for Columbia Records. David parlayed his recording success into headlining country shows in Las Vegas, a bold move that paved the way for other country acts in Las Vegas.

In the early 1980s, Frizzell founded the musical duo of Frizzell & West with Shelly West, daughter of country superstar Dottie West. Their recording of “You’re The Reason God Made Oklahoma” was chosen by Clint Eastwood for the soundtrack of the film, Any Which Way You Can. The song became a smash hit (ranking #6 in the CMT Countdown of the 100 Greatest Duets) and the duo went on to be one of the most awarded acts in entertainment.

Frizzell always maintained a vibrant solo career, scoring the huge chart-topping hit, “I’m Gonna Hire A Wino (To Decorate Our Home).” The record is a country music standard, and has been featured on CMT’s 40 Greatest Drinking Songs in Country Music.

Frizzell is a multi-award winner with honors from the Country Music Association, the Academy of Country Music, Billboard and Music City News. He is a three-time Grammys nominee who does not rest on his many accolades. The writer, producer and performer remains active on the touring circuit, in the studio and through almost countless other creative endeavors. To learn more, visit: www.davidfrizzell.com.