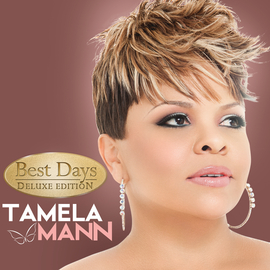 Tamela Delivers Anointed Performance Of “Take Me To The King,” “I Can Only Imagine” Medley To Sold-Out GMA Dove Awards Crowd

“I give praise and thanks to the Lord – what a blessing!” said Tamela. “I’m thankful to everyone for their support of my music. I’m honored to be recognized by the GMA, and I want to give all of the glory to Him.”

Tamela performed a compelling medley of “Take Me To The King” with her new single, “I Can Only Imagine” backed by her band during the show. Her soaring vocals and passionate delivery brought the captivated audience to their feet, joining her in worship.

Tamela releases her BEST DAYS DELUXE EDITION CD on October 29 through her independent label Tillymann Music Group and Central South Distribution. The deluxe version features five new recordings including three live versions of Best Days hits and two new songs. The Best Days Deluxe Edition contains live versions of concert fan-favorites “Guest of Honor,” “Best Days,” and “Take Me To The King,” which is featured in a medley with “I Surrender All.” It also includes an updated version of the classic Kirk Franklin/Tamela Mann collaboration “Now Behold The Lamb” and newly released Gospel radio single “I Can Only Imagine.”

Tamela received her first GMA Dove Award in 2010 for her album The Master Plan.

Tamela Mann is an accomplished NAACP Image Award nominated actress, GRAMMY® Award nominated singer, songwriter, producer, and businesswoman. Starring as “Cora Simmons,” the loving and churchgoing daughter of beloved Deacon Leroy Brown and the iconic Madea Simmons on the hit TBS comedy Tyler Perry’s Meet The Browns, Tamela makes millions laugh every week while she enjoys a unique personal double blessing. Continuing the role she originated in Perry’s 2004 play and 2008 film of the same name, the sassy, high spirited multi-talented singer and actress is able to work every day with David Mann, her husband who plays Leroy. Tamela’s highly successful, Dove Award-winning CD “The Master Plan” remained at the top of the Gospel sales chart for almost a year, and in 2010, Tamela released “The Master Plan Deluxe Edition” which contained not only all the songs from the best-seller, but David’s CD, “Mr. Brown’s Good Ol’ Time Church,” and a full bonus DVD of behind the scenes footage and music videos. Tamela’s CD “Best Days” debuted in 2012 at #1 on several music sales charts and includes the #1 single “Take Me To The King,” which earned Tamela her first GRAMMY ® Award nomination for Best Gospel/Contemporary Christian Music Performance. Both the CD and single remained at #1 for a record number of weeks; the CD charted at the top for 15 weeks and the single for 25 weeks. Tamela and David’s new cooking and lifestyle show, “Hanging With The Manns,” along with several other film and TV productions, will be released soon.