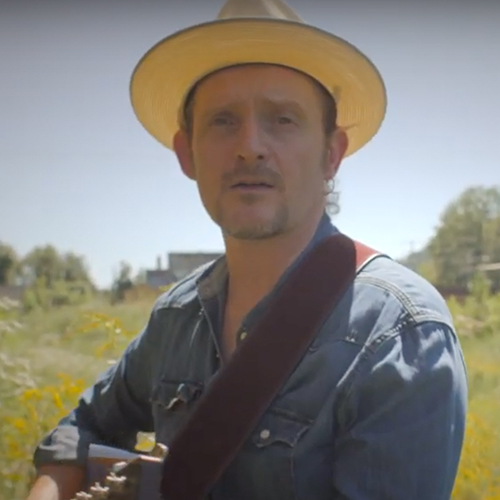 Following the release of his single, “Mill Town Blues,” (STREAM/BUY) Nashville singer-songwriter and guitar master Thomm Jutz (pictured) is back with an accompanying video.

The video showcases Jutz on guitar and lead vocal as he wanders through the abandoned streets and fields of North Carolina with a Martin in hand, capturing the vibe of a modern-day troubadour in a style that pays homage to the song’s hero, the legendary rambling banjo player Charlie Poole.


“The Norfolk Southern Railroad ran through Asheville, right alongside the French Broad River from the 1880s,” he notes. “Surely Poole came through this area in his time. It was the perfect spot for warehouses and other industrial structures. Today the long-deserted old buildings are being rebuilt, and in my mind, Charlie and his North Carolina Ramblers are every bit as real and alive as the art studios, coffee shops and breweries sprouting up in this ‘new’ part of ‘old’ Asheville. That’s why we shot this video there.”

Of the song, Jutz says, “One of the most beautiful aspects of writing within the Bluegrass idiom is that characters like Charlie Poole and the environment they lived in still matter — they never went away and they’ll live on in the songs that we sing. I’m a traditionalist and preservationist at heart — and that’s why I love writing these kinds of story songs.

Together with Mountain Home Music Company, Jutz is releasing a large body of work beginning with single releases and culminating in two volumes of collected songs under the apt title, To Live In Two Worlds. The next two singles will be released in November 2019.

About Thomm Jutz | homm Jutz is a songwriter, producer and guitarist whose songs have been recorded by Balsam Range, Chris Jones & The Night Drivers, Terry Baucom, Nanci Griffith, Kim Richey and many more. To date he has had six #1 bluegrass songs and was nominated for IBMA Songwriter Of The Year in 2017 and 2018. His song “Going Back To Bristol” was nominated for Song Of The Year 2017. He’s the producer and principal songwriter of The 1861 Project, a three-record collection of original songs about the American Civil War. He also co-wrote and produced I Sang The Song, a musical biography of Mac Wiseman featuring John Prine, Alison Krauss, Shawn Camp and many other renowned Bluegrass artists. Jutz has previously released two Bluegrass solo records Volunteer Trail and Crazy If You Let It.