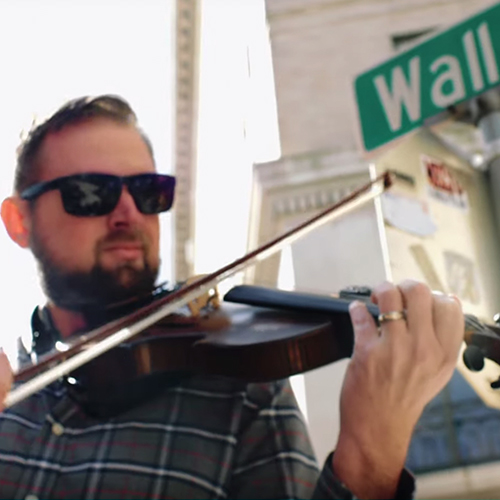 From their 2019 release Myths We Tell Our Young (STREAM/BUY), Unspoken Tradition’s “Cold Mountain Town” is a love letter to the dynamic mountain city of Asheville, North Carolina and the growing pains it is facing in these changing times.

In an effort to acknowledge the city’s historically rich musical culture, the band has released a video — premiered by The Bluegrass Situation — containing archival footage of Asheville juxtaposed with the ongoing construction happening to meet the demand for tourism. The video, filmed at Zillicoah Beer Company and other locations around Asheville, was directed by Bob Peck and produced by Mountainwater Films for Mountain Home Music Company.

It’s also a song about the struggles of a hometown musician chasing a dream that might have turned out to be a myth.

“For the album Myths We Tell Our Young, we explore themes of mountain culture and how it is evolving. There is no better example than Asheville, NC,” says Ty Gilpin, Unspoken Tradition’s mandolinist, vocalist and writer of this song, in The Bluegrass Situation post. “I’ve lived and played music in this city for over 25 years and watched it change and grow while still holding strong to its rich Appalachian music culture. This song is dedicated to artists that continue to struggle and survive in this ‘Cold Mountain Town.’”

Myths We Tell Our Young debuted at #5 on the Billboard Bluegrass chart, saw a chart-topping song with “Dark Side of the Mountain” and received praise from Bluegrass Unlimited saying, “They drive as hard as any of the older bands of yesteryear, but with a new approach that incorporates influences from various newer sources. They are at once part of the tradition and shapers of a new sound. Their sound is a virile, volcanic blast as the instruments and vocals jump out in a torrent of notes and words. It’s compelling and challenging all at once.  ”

Watch the video for “Cold Mountain Town” above and CLICK HERE to stream/buy Myths We Tell Our Young.

About Unspoken Tradition | Unspoken Tradition is about new, original Bluegrass. Inspired by their own influences and the roots of traditional music, they bring a sound that is both impassioned and nostalgic, hard-driving but sincere. Their 2019 release from Mountain Home Music Company, Myths We Tell Our Young, debuted at #5 on the Billboard Bluegrass charts and has seen 5 top-charting radio singles, including a #1 spot on the Bluegrass Today chart for “Dark Side of the Mountain.” Their material is mostly original and reflects the ever-changing culture of Western and Central North Carolina where they call home. The band has earned a fervent following in the Southeast, selling out shows in Asheville, NC as well as the legendary Station Inn in Nashville, TN. They have also performed twice on the coveted Watson (main stage) at MerleFest. With heavy airplay on Sirius XM’s Bluegrass Junction and ever-growing streaming numbers, Unspoken Tradition is a fast-rising voice of a new generation of roots music artists. Their debut recording, Simple Little Town (2013) saw quick success in radio and with tastemakers. Their follow-up release, Miles Between was featured on the nationally syndicated NPR show The World Cafe. Represented by Midwood Entertainment, Unspoken Tradition plays nationwide.