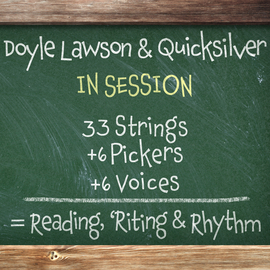 Bluegrass Hall of Fame member Doyle Lawson is well known for high standards in every aspect of his musical career. For exquisite precision in vocals, harmony and musicianship, Doyle Lawson & Quicksilver’s live shows and recorded projects are unmatched.

Some of the most accomplished and respected names in Bluegrass honed their craft under the tutelage of Lawson’s mastery. Now, the ‘School of Bluegrass’ is back In Session, with a masterful collection that promises to educate, once again, just how Bluegrass is done.

In Session begins with “Roll Big River,” a driving banjo tune that sets the course for the outstanding Bluegrass for which Doyle Lawson & Quicksilver have become renowned. Up next is a lesson in history with the old-fashioned courting number, “Wilma Walker” and the sentimental Southern ballad, “Calling All Her Children Home.”  In Session also explores a grassy update of the 1950’s hit song, “You, You, You” as well as a rendition of Bill Monroe’s classic instrumental “Evening Prayer Blues.” The album wraps with pleasingly contemporary version of Moe Bandy’s “Americana,” completing the course of “reading, ‘riting, and rhythm.”

Not only is each song spectacular, but In Session is a perfect example of Lawson’s knack for the progression of tunes on an album. It is not just a collection, but a satisfying experience from its energetic opener to mellow ballads and the final, nostalgic closing number. The flow from song to song takes the listener through a path of music-inspired emotion.

Lawson’s current lineup is stronger than ever with lead vocals handled by Dustin Pyrtle, Eli Johnston and Lawson himself. The harmony work on In Session makes it clear why the group has won multiple IBMA Vocal Group of the Year Awards. A noted mandolin master, Lawson always surrounds himself with top-flight players. In Session also boasts the phenomenal Dobro playing and vocals of Josh Swift, the impeccable Joe Dean on banjo and vocals and newcomer Stephen Burwell on fiddle.

Doyle Lawson & Quicksilver have nearly forty albums to their credit, are seven-time IBMA Vocal Group of the Year winners, with enough Grammy, Dove, ICM, IBMA, and SPBGMA nominations and awards to fill a chalkboard. Lawson was inducted into the International Bluegrass Music Hall of Fame in 2012.