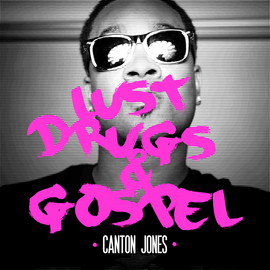 Free Download will serve as an appetizer while fans wait on God City, USA.

Canton Jones—the Grammy, Stellar and Dove Award nominee—will release his new mixtape Lust, Drugs & Gospel as a free download starting Tuesday, February 18th. Additionally, this project will be distributed by Syntax Creative making it available at all major digital service providers, and available for pre-order on iTunes today. This full length release will serve as an appetizer while fans wait for God City, USA to be released this Spring.

On “Prodigal Daughter,” Canton Jones writes to a woman who was driven into prostitution. Like the story of the prodigal son, “the entire mixtape communicates that no matter how far you’ve gone, you aren’t too far to come home,” says Canton Jones.

Canton Jones has been professionally recording music since 2002, but has been singing and performing his whole life. His artistic style comes from a diverse background which includes—but is not limited to—being part of a gospel quartet as well as being raised by hip hop. This rich landscape of influences adds an unparalleled depth and diversity to his music.

“Whether I am preaching, singing, or writing—my calling is to reach people who need hope and direction,” said Canton Jones about his personal mission.

“Lust, Drugs & Gospel, is simply my attempt to offer hope to those who struggle with lust and drugs.” says Canton Jones. The official track-listing is as follows:

Canton Jones is a Grammy, Stellar and Dove Award nominee. Along with producing his own albums, he also runs CAJO Records which is dedicated to providing the best in urban and inspirational music. Canton Jones is also the Outreach Pastor at New Hope Church in Fayetteville, GA. To learn more, visit: cantonjones.net.