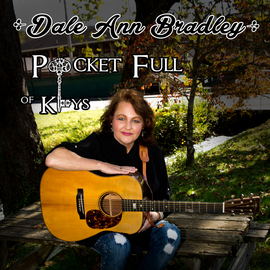 Dale Ann Bradley has released Pocket full of Keys, her first album since returning to Pinecastle Records. With this release, Bradley returns to the label that offered her the opportunity to become a solo performer after recording for them with the Coon Creek Girls for several years back in the 1990’s. Bradley’s first single from the album, “’Til I Hear It From You,” a cover of The Gin Blossoms 1990’s hit, continues her theme of recording songs that are classics from other genres. She has previously recorded Tom Petty’s “Won’t Back Down,” Fleetwood Mac’s “Over My Head,” Seals & Croft’s “Summer Breeze” and U2’s “Still Haven’t Found What I’m Looking For.”

“This woman is a singer’s singer and it’s inspiring every time she opens her mouth. Enjoy this great artist. I always have.” – Vince Gill

“Dale Ann continues her tradition of picking thoughtful songs for recording. Her singing has never been better… love the variety of songtypes.” – Phil Nusbaum, Bluegrass Review

Pocket Full of Keys offered Bradley the opportunity to produce and arrange all 12 tracks on the CD, the first time she has done this in her entire career. The singer says as she progressed with the project, it took on a theme that reflects her days of growing up in rural Eastern Kentucky — days of no running water, a scarcity of electricity and no musical instruments in the Primitive Baptist church where her father preached. Nevertheless, Bradley grew up singing in the church and learning everything she could about her new found love of music. Once she had a guitar, acquired at the age of 14, nothing could hold her back.

When reflecting on the years growing up in Kentucky, Bradley can only relay thanks for that time in her life. “I’m thankful for the way I grew up,” she says. “We had food, we were together. We stayed warm and dry, we didn’t have anything fancy, but we made do. It gives me a sense of appreciation and compassion that I’m thankful I have.”

The songs that Bradley recorded for the new album that solidify the rural Kentucky theme were Dolly Parton’s “Stranger” and two of her own, “Soldiers, Lovers and Dreamers” and the title cut. The tunes reflect the coal mining towns and hollers that are so familiar to Bradley to this day. The singer/songwriter adds to those with “Hard Lesson Road,” a duet with Jim Lauderdale, and “Rachel Pack Your Sunday Clothes.” The other seven tunes on the CD are just as poignant and true-to-life, staying close to the rural life theme. Bradley won’t say she lived every word of the songs, but she sings them with enough emotion to make the listener think she did.