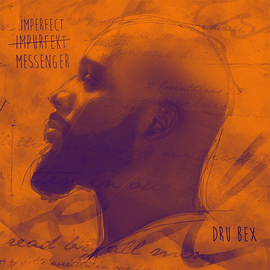 Available on April 24th is Dru Bex’s new EP “Imperfect Messenger.”  The EP is preceded by its single, “NOW.” From the concept to the sonic execution, Dru strikes a resonating chord with listeners of all backgrounds. He states,

“With this EP, I was intentional about conveying a timeless biblical truth: God uses broken, imperfect people to deliver His perfect message of love and hope. From the second verse of the very first song, “Mountain Top”, where I talk about coming to terms with someone I always looked up to in ministry “falling from grace”, to the song “Tenacious” where I try to envision Jesus expressing his never ceasing love to someone who might feel unworthy or undeserving, my goal with this project is to point the listener to the only truly perfect being to ever walk the earth, Jesus Christ, in whom even the most flawed of all people can turn to and find love and acceptance.”

Sonically, “Imperfect Messenger” is a departure from Dru Bex’s earlier album, “Nowhere to Now Here“. Pushing past creative boundaries, Dru’s current offering, combines infectious melodies and harmonies, with potent wordplay and storytelling. A child of Toronto, Dru Bex manages to carve out his own unique sound while still embodying the sound of the city. In his own words,

“Being from where I’m from (Toronto) and witnessing the emergence of a unifying sound coming out of the area, both on a local and world stage, I wanted to bring some of that flavor to the CHH fanbase and see how it would be received… Then there’s the single “Goin’ Up” which is my ode to the Bay Area sound that I’m a fan of and just a fun track in general.”