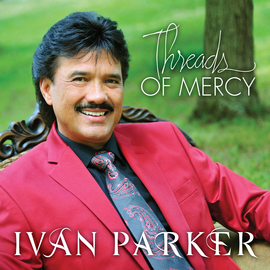 In an industry dominated by quartets and mixed groups, Ivan Parker is a solo artist who has crafted his art and established a distinguished ministry characterized by the artist’s unmistakable style.

Now, Ivan Parker has created an album that weaves a musical passage through the fabric of life. Threads of Mercy is a lyrical journey, describing God’s presence through life’s highs and lows, good times and bad, with one thing always standing true: mercy brings us through to the glory of God.

Threads of Mercy is available on Horizon Records on January 20, 2015 and available for pre-order at iTunes now.

From the kicking first radio single “’Til the Shackles Fall Off” and the upbeat “On the Solid Rock I Stand,” to the thought provoking “Silent Prayer” and “God’s In The Middle Of It,” the album sews a story-line of God’s love and mercy. Parker’s award-winning voice echoes with the sound of yesterday’s great singers while his style is contemporary and versatile. Whether it’s up-tempo or a ballad, an Ivan Parker song is almost immediately identifiable. The artist hits his vocal sweet spot throughout this new record with a voice that matches perfectly and warmly with the songs on Threads of Mercy.

Ivan Parker has won thirty Singing News Fan Awards, including eleven Male Vocalist awards. Threads of Mercy may well take him on to many more accolades. It is an inspiring and uplifting collection.

“Ivan Parker has won every vocalist award possible over the years, first as a quartet singer and then as a soloist. His ministry is just that – a ministry which reaches thousands of people every year. Can there be any doubt he is the premier singer in gospel music. Everyone at Horizon Records is honored to have him on our label.” – Mickey Gamble, President, Horizon Records

Like most Christians, Ivan has known some “ups and downs.” He remembers well the day, when he was just 9 years old, when he was saved as he was moved by a fiery sermon in his daddy’s church. Parker admits to mistakes along the way, but he lives with his favorite passage from Scripture, Psalm 23. “I believe God does His greatest works in us when we are in the valley. It is there that we are more open to what He has in store for us.”

When asked if he had any unfulfilled dreams, Ivan has said, “You never stop dreaming about where your ministry is going. I just pray that God will take what I am presently doing and increase it. I am living my dream…but the dream is not completed yet.” The song goes on.