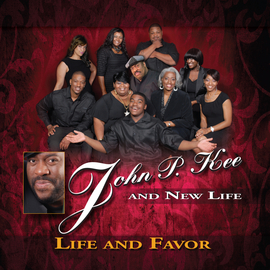 Pastor John P. Kee was born the 15th of 16 children to John Henry and Lizzie Shannon Kee, and he affectionately describes his childhood home as “outside the county line” in Durham, NC. Mrs. Ethel G. Shannon, John’s maternal grandmother, also played a pivotal role in his upbringing and remains a consistent source of spiritual guidance today. Music in the home and attending church highlighted the family’s weekly activities. John exhibited extraordinary talent at an early age; vocally, harmonically, and instrumentally.

When John was 8 years old, a piano was purchased for two older siblings to take lessons in the home. While they were both totally disinterested in it, John was fascinated by the instrument. John began mimicking a young pianist from Cleveland, Daryl Bailey, who was the church musician at the time. Drawing inspiration from the music he heard in church Kee began to play and write his own material by age 9. At age 13 John and his best friend at the time, jazz bassist Clinton “Chip” Shearon, started a jazz trio and a gospel community choir in the city of Durham.

He would later be graced with the opportunity to study piano under the tutelages of the late Margaret Shearon, Yusuf Salim, and master of jazz Mary Lou Williams. An outstanding student, John was placed in a school for musically gifted children; The North Carolina School of the Arts, in Winston-Salem, NC. He went on to study further in Northern California with his older brothers at Yuba College in Marysville, who shared their tactical knowledge of writing, singing, and music production with their young sibling.

As a very young man in of the late 70’s early 80’s, he was privileged to work with some of the Nation’s greatest Pop, Jazz and R&B groups. He landed a job as National Musical Director with Miss Black Teenage Pageants, a position that would bring him back to North Carolina.

In his late teens, he drifted into a street lifestyle that brought him to Charlotte, NC. Once in Charlotte, he moved to the Double Oaks Community and began a life of corruption. The senseless violence that encompassed him became insufferable until material possessions offered John no consolation. After witnessing an untimely death to a very close friend, John knew it was time to change course.

In his early twenties John found himself working at the PTL Network’s Buffalo Park. It was there where the young man initiated his transformation from a street thug and drug dealer named John, to gospel legend John P. Kee, and ultimately to Pastor Kee. He had gained foundational principles that gradually and eventually propelled him into victorious living. He returned to active involvement in his community as a musician, clinician, and in the end an internationally recognized writer.

In the mid 1980’s he started a community choir in Charlotte. This choir, which got its rise from a “feed the hungry” street ministry, achieved rapid success and eventually grew to become the renowned and much awarded New Life Community Choir. As a solo artist as well as with the NLCC, John P. Kee has received a flood of awards and nominations to name a few:

In the late 1980’s he was crowned the Prince of Gospel, which is a title he laughs at because his given middle name is Prince. (“If they’d never given me the title, I would have always been my Grandmother’s John Prince”, he often says.) He has received hundreds of proclamations from our Nation’s cities, and in 2005 He was inducted into The Gospel Music Hall of Fame.

Over the course of his professional career that spans three decades, he has written music for Hallmark, Inc., Stephanie Mills, Jonny Lang, The Hawkins Family, Daryl Coley, Billy Preston, Dorinda Clark Cole, Joe Walsh, Rev. James Cleveland, Florida Mass Choir, Mississippi Mass Choir, Vanessa Bell Armstrong, and made History in 1982 as one of the first writers to ever write more than one song for the legendary Dr. James Cleveland’s Gospel Music Workshop of America. His music has been featured in film and on television in commercial advertisements and even on Saturday Night Live. His Music catalogue is said to be one of the largest in the world today by an individual Publisher/Writer.

In December of 1995, Pastor Kee married the Beautiful Felice J. Sampson. Together they have nine wonderful children: Christopher, Justin, Shannon, Aishia, John III, Tredell, Sakiya, Joniya and Kamari. Their personal lives are focused on home, family, church, and seed planting in their local community. Pastor Kee is a devoted husband and father and primarily spends much of his time writing and fishing with his family.

Although he is one of gospel music’s greatest pioneers, his real passion is for clear, genuine, and aggressive street ministry. His heart’s desire is to show the love and power of the Lord to the world – specifically to the Inner city communities of our Nation.

Since its inception in 1995, Pastor Kee has been the full-time pastor of the New Life Fellowship Center. Through non-traditional outreach that transcends the four walled structure, the church’s unique approach to ministry has resulted in a rapidly growing, thriving congregation. Pastor Kee’s ability to personally relate to the urban lifestyle allows him to reach those who would not typically attend church and further are not welcomed by many assemblies.

“There are so many people bruised”, he says, “that our churches should be running over with the lost and forgotten! There is so much hurting and suffering in the world that the only way not to be overwhelmed by it is to know that you are doing something about it.” Where there has been a natural disaster, where unemployment has overwhelmed a city, or anywhere people are hurting you’ll find Pastor Kee doing what he believes he was called to do – Encouraging, Inspiring and Seed Planting!