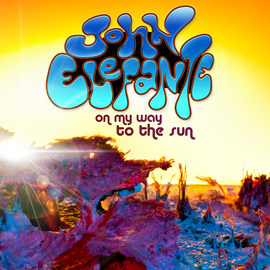 John Elefante, former lead singer of the powerhouse rock band Kansas, announces the release of his new solo album, On My Way to the Sun, on May 7, 2013.  What started as a Kickstarter project in January of 2012 is now a full-length album distributed and marketed by Syntax.

“My new CD is really birthed out of demand from my core fan base, as well as a longing to make a new record better than the one before,” Elefante says.

When he began plans to make a record, Elefante took a detour from the often unsure record label route and decided to try a new approach.  “With a cutting edge company like Kickstarter, your fans pledge money to enable you to record,” he says. With the help of nearly 500 backers, Elefante raised more than $57,000.

“The songs fell together, and  I believe the result is a new rock record that classic rock lovers will really sink their teeth into,” he says.

On My Way to the Sun is Elefante’s 10-track epic symphony of classic sounds that echo back to his Kansas roots. The first track and single “This Is How the Story Goes” features members of Kansas and sets the tone with grand harmonies and sweeping melodies. Songs like “The Awakening” bring that 1970s rock into a new age, while “We Fall Short” is an acoustic dreamscape.

Lyrically, the album is full of positive messages that speak to faith and hope. “This Time” is the brave telling of a young teen’s divine encounter at an abortion clinic that leads her to save her baby. The song rings true for Elefante has his adopted daughter was also rescued from abortion. He plans to turn the song into a video that shares the story.

When it came time to get the record into the hands of fans, Elefante knew exactly where to go.  “It was a no-brainer when it came to who I would first contact for the digital aspect of things,” he says. “Syntax was the smart choice. I have a long-time tried and true trust for them. I know I’m working with guys who recognized many years ago that downloads were the future.”

“I’m still excited every time we do a new deal,” Tim Trudeau, CEO of Syntax Distribution. “So many different companies and people have put their time into John Elefante over the years, and it’s a privilege to now be able to count ourselves among such an elite group.  It still blows my mind that we went from a tiny local label to being one of the largest independent distributors specializing in everything from bluegrass to hip hop.”

John Elefante is a celebrated singer, songwriter, producer and performer.  He sang lead vocals and wrote music with Kansas for three multi-platinum albums. As a record producer, his albums earned numerous Dove Awards, four Grammy Awards (most recently in 2000) and ten Grammy nominations. Learn more about John Elefante at www.johnelefante.com.