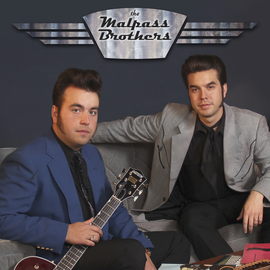 They’ve got the sound, and they’ve got the look. The Malpass Brothers, Christopher and Taylor, are unabashed and shameless purveyors of traditional music, playing songs that are reminiscent of classic country, rockabilly and honky-tonk songs of decades past.

The Malpass Brothers’ will release May 26, 2015 and is available for pre-order now at iTunes, Amazon and Google Play. The self-titled album was produced by Bluegrass legend and IBMA Hall of Fame member Doyle Lawson. Available on Organic Records, the album is a collection of inspired gems and original songs that harken back to another era.

“Timeless is when the past is the future and the future is the past. The Malpass Brothers’ sound is timeless,” Lawson says.

Steeped in country music from the time they could walk, Christopher and Taylor Malpass grew up with a grandfather who taught them the music of Hank Williams, Sr., Merle Haggard, Porter Wagoner, Kitty Wells, Ernest Tubb and more.

With traditional country music coursing through their veins, the brothers carried on the family tradition with performances taking them across the country and to Europe. Soon, the Malpass Brothers found themselves performing with one of the legends their grandfather admired.

Merle Haggard first saw the brothers when they opened for him at a concert in their home state of North Carolina, and just a few weeks later, the brothers began opening gigs for the man whose music they’d emulated since their youth. They proudly spent several years working with Haggard and Hag Records.

“Well, they remind me a lot of myself and people that I knew when I was young,” Merle Haggard says. “They have their hearts into what we call ‘traditional’ country music. It’s valuable to me that we cultivate the young talent for that kind of music.”

Now signed with Organic Records, an imprint of the Crossroads Label Group of North Carolina, the boys are ready for the next chapter. With their own band, The Malpass Brothers have developed a unique, yet current style of traditional country with a blend of original songs and favorites from another era.

The songs on the album are both new and classic, interwoven seamlessly. Chris and Taylor embrace their predecessors in their sound and in the instruments they play. Chris plays Charlie Louvin’s guitar, and Taylor plays Ira Louvin’s mandolin on “Satan and the Saint” and “I Found Someone to Love” as a respectful nod to the authentic sound created by that legendary brother duo. “Here In Alberta I’ll Stay” is a new song by Pete Goble and sung by Chris with a delivery reminiscent of Marty Robbins’ inimitable style. Chris’ vocals on the original “Learn to Love Me Too” are part Hank Williams, part Merle Haggard, and pure Chris Malpass. Brother Taylor shines with his powerfully lonesome lead vocal on “Hello Walls” as well as duet harmonies throughout the album. Taylor’s fine musicianship is spotlighted with stellar leads on Gretsch guitar and traditional mandolin.

This is who we are… My brother Taylor and I do the type of music we do because this music speaks to us, and speaks to the souls of its listeners. For us, traditional country music is the ‘real deal’ – every song portrays life’s joys, heartaches, problems and happiness. It comes from the heart, and has depth and truth. Nothing is sugar coated. Our goal, really, is to see this music be revived, to help ensure it doesn’t fade away. It is so encouraging to have young people come to our shows with a new interest in our ‘old music.’ Being able to introduce what we love to another generation feels like a great accomplishment for us. We want this music to be around for our children’s children… — Christopher Malpass