With music that is part bluegrass and part roots rock with a dose of funk-influenced danceable rhythms, Fireside Collective is stylishly blurring the lines of traditional roots genres. The Asheville, North Carolina-based group is out to make a unique artistic statement through a diverse approach—one that has already gained the quintet a fervent fan base and the attention of their peers.

On Elements (Pre-Order now, STREAM/BUY after Mar. 20, 2020), Fireside Collective blends the characteristic interplay of bluegrass instrumentation and harmonies with strong original material and exuberant energy. The album, now available for pre-order, will be released March 20, 2020. 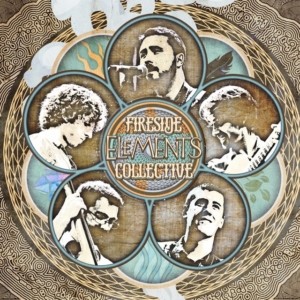 The album is preceded by two singles, “She Was An Angel” (STREAM/BUY)—premiered by The Bluegrass Situation—and “Don’t Stop Lovin’ Me,” (STREAM/BUY) which gained ground for the band with national radio airplay and critical acclaim.

Elements announces the arrival of a band that has found its place in the contemporary era of roots music by both reflecting and shaping new sounds of the genre. Pre-order it HERE.

Blending the characteristic interplay of bluegrass instrumentation and harmonies with strong original material and exuberant energy, Fireside Collective has drawn on folk, blues, funk and a wide variety of bluegrass sounds to create a distinctive body of work that’s all their own.