Simultaneously thoughtful and jaunty, melodic and philosophical, “Take the Long Way Home” (STREAM/BUY—produced by Jim Lauderdale) was, fittingly enough, born on a drive–in this case, by Leach’s wife and bandmate Miranda. “The tune came to me while I was taking a long drive back home to clear my mind,” she recalls. “I was aiming to get some things out of my head and this song popped in instead. By the time I’d gotten home from a 25 minute drive, the chorus had been written.”

Alex told The Bluegrass Situation, “After writing the song, my wife and I had a vision of how we thought the video would look. With plenty of help from our Mountain Home family and our band, we were able to make our vision a reality; complete with a ’60s, bright orange VW Microbus and bell-bottoms for all! Each of us got to unleash a bit of our inner, free spirit for the video, and we think the outcome gives off the perfect vibe. We hope you enjoy this groovy journey with us as we ‘Take the Long Way Home.’” 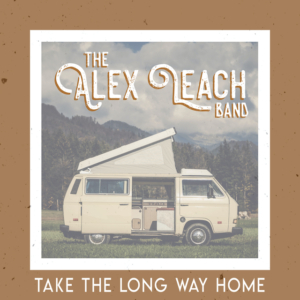 About The Alex Leach Band | Hailing from the mountains of East Tennessee, Alex Leach is no stranger to the world of music. Just 30 years old, he has already been in the business for more than two decades, earning two “DJ of the Year” awards from the Society for the Preservation of Bluegrass Music of America by the time he was 15, and appearing on CMT’s “Big Ticket,” the BBC, and Peter Jennings’ “ABC World News Tonight.”

Yet even as he was building his reputation as one of the premiere radio voices in bluegrass, Alex was honing his skills as a guitarist and banjo player. He began his professional career as a musician at the age of 19, and was recruited a few years later by Ralph Stanley II, the son of iconic bluegrass pioneer, Ralph Stanley, with whom he had the opportunity to play banjo on the Grand Ole Opry in 2014. In the years that followed, he toured widely with “Two,” earning critical accolades for his playing, his compelling lead and harmony vocals, and for his additions to the bluegrass canon with songs like “Mountain Heartache.”

In late 2019, Leach took another giant step in his career when he and his wife, singer Miranda Jo, launched the Alex Leach Band, a quintet that includes JT Coleman (bass), Joshua Gooding (mandolin, vocals) and Brandon Masur (banjo). ​With influences ranging from The Stanley Brothers to The Beach Boys, and Curtis Mayfield to Porter Wagoner, Alex Leach’s music is both traditional and original, nostalgic and forward-looking — the sound of a new generation of bluegrass artists.