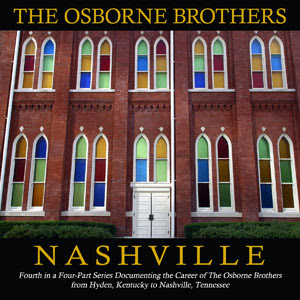 Pinecastle Records is excited to announce the release of The Osborne Brothers’ album, Nashville, which features unreleased recordings from the 1970’s. The album completes the four-part Osborne Brothers series chronicling their career from their hometown of Hyden, KY all the way to Nashville, TN. The album arrives as Bobby Osborne celebrates his 50th year as a Grand Ole Opry member. In a recent interview with CMT Edge, Bobby Osborne explained quite a lot about the album and their sound at the time of its recording.

“It’s a great chance to hear the Osborne Brothers in their prime.” – Keith Lawrence

“What the Osbornes were doing stood out, though. Here was a first-generation bluegrass brother duo straddling electrified, early ‘70s country and straight-ahead bluegrass — and a boldfaced boundary between the two genres had most certainly been drawn by then.” – CMT Edge

The first seven tracks on the album were recorded at the famed Bradley’s Barn in Nashville in the mid 1970’s, but never released due to the Osborne Brothers ending their association with their record label at that time. The end result was that the Brothers were able to retain ownership of the recordings, which feature top Nashville studio musicians including: Dale Sledd, Robby Osborne, Dennis Digby, Ray Edenton, Hargus Robbins, Vassar Clements, Leon Rhodes, and Hal Rugg. The ‘electric’ sound of the band at the time was jarring to some bluegrass fans.

Sonny Osborne recalls the Osbornes’ decision to make the change: “We were playing a lot of package shows in those days along with other Opry acts. To be honest, at first, we failed miserably. The reason being, after listening to three or four electric bands before we came on, the audience’s hearing had adjusted to that volume and they just couldn’t hear us. We put a pickup on Bobby’s mandolin, Dale Sledd’s guitar, my Guitjo, and we were already using an electric bass. We used Ronnie Reno’s bass amp, along with the house band’s steel and guitar amps. We started out with the volume rather low, but that did not work, so we adopted a policy of ‘peel the paint off the walls!’ and at least make them listen, hear, and pay attention. We did, and they did. Using steel, piano, and electric guitar, sometimes fiddle, and drums on recordings also got us on a lot of country stations that would not play bluegrass.”

Nothing was immediately done with the recordings and the Osborne Brothers eventually returned to their acoustic sound effectively leaving the old recordings to age like a fine wine. The eighth ‘bonus’ track, “Half a Mind,” was recorded in 1995 with one of the best lineups that the Osborne Brothers ever had backing them: Terry Eldredge, David Crow, Terry Smith, and Gene Wooten.

“It doesn’t – and hasn’t gotten any better than this!” – Music News Nashville

The four-part Osborne Brothers series began over a decade ago with the release of the album, Hyden. Next was Dayton to Knoxville followed by Detroit to Wheeling (which also features historic recordings). It was feared that the series would remain incomplete after Sonny Osborne announced his retirement in 2007. However, knowing that the unreleased tracks were available, and after much consideration it was decided that it would be appropriate to release the tracks as the last part in the series and title it Nashville in the same theme as the other titles.

Justin Moses – “Between the Lightning and the Thunder” (feat. Dan Tyminski)
©2004 - 2020 Syntax Creative a division of Quality Junk
MENU