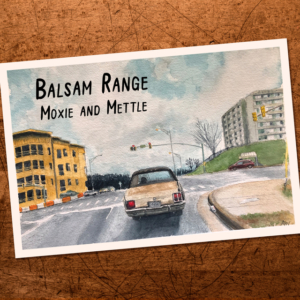 Two-time International Bluegrass Music Association Entertainer of the Year, Balsam Range, has become one of the genre’s most award-winning acts. Since forming in 2007, the group has garnered thirteen IBMA awards on the heels of eight critically-acclaimed albums, with their most recent, Aeonic, debuting at #1 on the Billboard Bluegrass chart and spending 46-weeks on the chart.

Even with all the awards, the #1 hits, and more than a decade of steady success, for Balsam Range what matters most is still a song, a message, a distinctive sound and a compelling performance. And though the western North Carolina quintet is known as a bluegrass band par excellence, they’ve always escaped easy categorization; just when you think you’ve got them pegged, they’ll surprise you once again. Such is the case with their upcoming album, Moxie and Mettle (Pre-Save, Pre-Order now; STREAM/BUY on/after 9/17/21). The album includes the band’s four most recent singles, each of which topped the bluegrass charts, and a new focus track heading for radio, rounded out by a collection of songs that reveal a group at the height of its powers—and one intent on speaking to the broad range of human experience.

“Highway Side,” the new emphasis track, underlines the point in typical Balsam Range fashion, marrying a Rashomon-like glimpse of a driver passing a hitchhiker to a propulsive bluegrass beat that delivers the song’s empathetic message—“I wonder how did he get there…Something tells me he and I are the same”—through strong harmonies, deft picking and an irresistible sing-along chorus.

In “Richest Man,” the same observation of shared humanity is revealed through a contrast between material wealth and other kinds of abundance. The group’s first single since their chart-topping Aeonic album, it asserts what we all have in common, especially at a moment when our universal humanity has never been more apparent. “Rivers, Rains and Runaway Trains,” on the other hand, offers a more narrowly drawn portrait from the pen of IBMA Songwriter of the Year, Milan Miller, and frequent co-writer Beth Husband; its depiction of a man long habituated to careful planning who finds his world turned upside down by a whirlwind romance is at once powerful and intimate. Similarly, “Santa Barbara,” another #1 (click “play” button above to listen on this post), places the spotlight on a lone individual—here a man who’s too self-aware to deny the gap between the life he lives and the one he wants, or to deny his own responsibility for the difference.

Standing at the center of the project is the fourth advance single to go to #1, and the source of the album’s title. An emotional meditation on meeting hard times with perseverance and spiritual courage—“one part moxie [and] another part mettle”—“Grit and Grace” is a continuation of the tradition of reflecting genuine trials and the qualities it takes to overcome them, a heartfelt response to life’s struggles that gains its strength from the sense of community and values shared by both the band and their fans.

Other highlights include the eerie moonshiner ballad, “Franklin County,” a meditative “Traveling Blues,” Gospel favorite, “His Tomb is Empty Now” and there’s even a dash of swinging rockabilly flair in “Rooster Rock.”