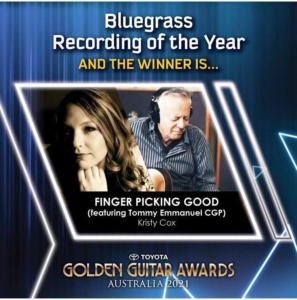 Cox, who won the same award last year for “Yesterday’s Heartache”—also from the album No Headlights (STREAM/BUY)—was nominated for a total of three Golden Guitar Awards this year, with the other two being Female Artist of the Year and Traditional Country Album of the Year. Click “play” above to watch Kristy accept her award for Bluegrass Recording of the Year.

The Toyota Golden Guitar Awards are the pinnacle awards event for country music in Australia, strategically wrapped around the Tamworth Country Music Festival, providing for much more than just the presentation of the coveted Golden Guitars. The awards show itself is a fast-paced night full of performances, showcasing the cream of Australian country music artists and the songs that have left their mark on the fans throughout the past 12 months.

Commencing in 1973, the awards are Australia’s longest running music awards and play a vital role in developing and promoting Australian country music talent. The 2021 awards were televised live on ABC Australia on, Saturday, Jan. 23, 2021.