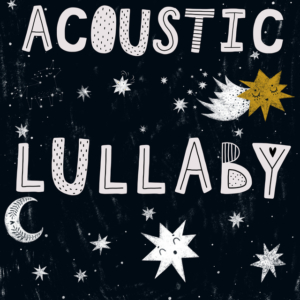 Pinecastle Records announces the official release of Acoustic Lullaby. Spearheaded by the label’s creator director Tony Wray, the goal was to create soothing content that is both calming and relaxing. Whether you’re putting a baby to sleep, or just wanting to create a chill vibe, Acoustic Lullaby is just right. In total, there are ten recordings included on the full album (see track listing below), which all showcase Wray’s years of experience as a studio musician and producer, accompanied by Tim Crouch.

“When Pinecastle approached me about doing a lullaby album, I absolutely jumped at the chance,” explains Wray. “I had a hard time staying awake during the recording of this album—haha! I hope adults as well as children find solace in this record.”

The main inspiration for Acoustic Lullaby came from conversations between Pinecastle owner Lonnie Lassiter and CEO Ethan Burkhardt, who both had babies around the same time. Spending countless hours streaming lullabies on Amazon’s Alexa and other smart devices, they thought of the creative idea to create acoustic tracks. After all, you’re never really too young to start listening to bluegrass and American roots music.

Included on the record are some of the most well-known and calming songs of all time. Kicking off the album is the classic “Brahm’s Lullaby,” which is known for lyrics on sung versions, “go to sleep, go to sleep, go to sleep little baby.” Other standouts include a version of “Jesus Loves Me” and the project concludes with “Twinkle, Twinkle, Little Star” (click play button above to hear this track).

Tony Wray is also helping to create content for social media in a new series called “Ask the Haberdashery.” It gives people the opportunity to ask a question about any topic ranging from playing bluegrass guitar, banjo, setup and recording. One of the punchlines for the series is, “If he doesn’t know the answer —no one does!” The seasoned professional has played on records for some of the biggest names in bluegrass including Ricky Skaggs, Sam Bush, Del McCoury, Tim O’Brian, along with notable country acts like Kane Brown, Sarah Evans and more!

Chris Jones & The Night Drivers – “Whither You Roam”

The Inspirations To Release Live Album On Horizon Records Scroll to top
©1997 - 2021 Syntax Creative, a division of Quality Junk Inc.