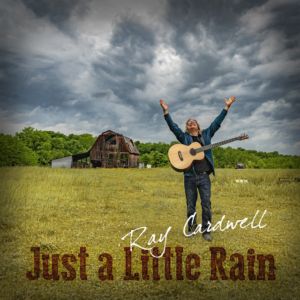 Bluegrass/Americana singer Ray Cardwell is charging full steam ahead with the announcement of his brand new single, “Take Me to the River.” The recording is featured on the Missouri native’s latest album, Just a Little Rain (STREAM/BUY), out now via Bonfire Music Group. Cardwell delivers his twist on the classic Al Green hit, which was originally released in 1974 by the Rock and Roll Hall of Fame singer.

Known for his unique approach while interpreting a song, Cardwell also just unveiled the official video for the single (tap/click “play” button above). During its premiere, Bluegrass Today notes, “If you follow Ray’s career, you realize he isn’t going to be cutting another version of a bluegrass standard. Known for years for his unconventional as well as contemporary approach to Mr. Monroe’s music, that is exactly where Cardwell is standing on this track.” The single serves as the follow-up to the No. 1 Grassicana hit “Born To Do,” which hit the top spot in 2020.

“This is my all-time favorite Al Green song! I was so happy to get it on my latest Bonfire Music [album], Just a Little Rain,” Cardwell tells Bluegrass Today. “We shot the video in South Carolina on a cold November day. I had a great group of pickers for the video, we had so much fun at the shoot we all hung out and picked for a while. I hope you enjoy it!”

Released via Bonfire Music Group, the latest album takes the next step in the career of the powerhouse vocalist, who ventured new levels, teaming up with top songwriters like Louisa Branscomb, Daryl Mosley, Danny Roberts, Rick Lang, Stephen Mougin, Irene Kelley, Darrell Scott and more. Standouts on the project include the title cut “Just a Little Rain” written by Lang/Rich Schleckser. In addition to lead vocals and bass by Cardwell, the album features Danny Roberts on mandolin, Adam Haynes on fiddle, and Tony Wray on banjo and acoustic guitar, plus Jaelee Roberts singing tenor vocals. It was engineered/mixed by Scott Vestal at Digital Underground Studio.