Americana; Organic Records — STREAM / BUY single Aaron Burdett’s award-winning songwriting tells stories about life as reflected through the eyes of a Western North Carolina working man. Still, it’s rare for one of his songs to be as close to the autobiographical bone as “Dirt Poor,” his latest single from Organic Records. Recorded with a lean, yet irresistibly rhythmic acoustic sound, it’s an authentic, clear-eyed but loving look at the distance between yesterday and today. “This song is in part about my parents and our family and my experience growing up in an old summer cabin in the woods in Saluda,” says Burdett. “But it's also about their friends and the community in the aggregate. The people we hung out with were cut from the same cloth for the most part. Everyone had some version of a shack in the woods they were slowly fixing up and raising a family in. They all gardened for food and sewed clothes and baked bread and somehow made whatever they needed instead of buying. That line about ‘spent most days helping somebody out’ is how I remember it." 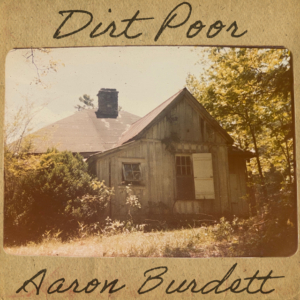 “It was a simpler time,” he continues, “Or at least I think it was. That's another element of this song I hope comes across: our perception and memory of times past. The nostalgia element, if you will. When I look at a picture of our life from 1979 it seems simpler, more relaxing, happier. I'm not sure that it was, but those old photos with the rounded corners and brownish tint make me feel that way. That day was exactly like today in at least one respect though—good-hearted people are doing the best they are able with what's in front of them. Hoping ‘it's gonna get better if we all live right.’” Echoing the refrain of his previous single, “Rockefeller” (STREAM/BUY)—“I’ve been getting by with what is mine”—“Dirt Poor” offers a detailed portrait of friends and neighbors who make self-sufficiency a community, rather than individual virtue, all summed up in a resolute “we were dream rich/but we were dirt poor” chorus that rings no less true for being immediately memorable. About Aaron Burdett | Creating music isn’t a means to an end, it is an end with a meaning for Aaron Burdett. Writing and creating songs is rooted somewhere deep in his psyche; it’s something that can’t be denied and must be shared. His lyrics are soul-touching, intelligent, witty, and poetic all at once, while his music style is a seamless blend of Americana, country, blues, bluegrass, and folk-rock that cohesively creates a story. The result is a distinctive, personal approach that’s earned him a growing list of accolades, from winning Our State Magazine’s Carolina Songs competition in 2012 with “Going Home to Carolina” to inclusion on WNC Magazine’s list of the top 10 most important musicians of western North Carolina, alongside such greats as Doc Watson, the Steep Canyon Rangers, and the Avett Brothers. Aaron’s writing is as prolific and genuine as the man. He grew up the oldest of three boys in the fairly isolated small town in Saluda, NC, where the Blue Ridge meets the Smoky Mountains. When Aaron was about 10 years old he was introduced to the music of Cat Stevens, the first of many musical influences that include the Grateful Dead, Led Zeppelin, Doc Watson, Tony Rice, Norman Blake, and David Grier. During his teen years, Aaron found his tenor voice in a choral setting and, performed in musical theater. In 1992 he went to the renowned Governor’s School of North Carolina for choral music. In his 20s, he played extensively in Boone, NC and owned a music store that sold instruments and offered lessons. No stranger to hard work, Aaron’s sense of adventure took him across the country working on various types of farms and ranches. While many mainstream country singers pay lip-service to the blue-collar working world, Aaron’s songs come from his life experiences. After seeing a lot of his friends and musical colleagues struggle to be full-time musicians, sometimes at the cost of their marriages and family lives, Aaron moved back to his hometown and decided to go another route. He started a construction business, built a home for himself and his wife, and started a family, all while continuing to write songs and playing music, recording an album every year or two. In 2013, Aaron decided to pursue music in earnest, so fast forward to 2019, and his distinctive clear voice has carried his dream into a successful career. Aaron’s songs effortlessly transition from solo performance to full band, with equal emotional impact on audiences. Aaron has 7 albums, Refuge (2017 on Organic Records), Tinderbox (2015 on Organic records), Fruits of My Labor (2014 on Organic Records), Breathing Underwater (2012), Stand Up Eight (2010), Resolve (2008), and The Weight of Words (2005). About Organic Records | Organic Records® is an eclectic home for a variety of artists that are singularly unique and defy categorization. In a time when music is becoming less defined by genre, Organic artists are developing their own musical identity outside the confines of traditional classifications. Organic Records® is their natural habitat. Organic Records® is a division of Crossroads® Label Group and is located in Arden, North Carolina.