Bluegrass; Pinecastle Records — STREAM / BUY single Scott Vestal Led 'Bluegrass 2020' Band Brings Back Popular Series for Upcoming Album Featuring Lead Single “Five and Dime” This year marks the 25th anniversary of the popular IBMA winning Bluegrass ‘95 project, which began a series of award-winning instrumental albums that ran through 2001. In celebration, Pinecastle Records is excited to announce the collection’s return with the formation of the all-star band for Bluegrass 2020, led by Scott Vestal, Patrick McAvinue, Cody Kilby, Dominick Leslie and Curtis Vestal. They just released the brand new single, “Five & Dime,” which is available now! “In celebration of the 25th anniversary of Bluegrass ‘95, we have recorded a new project called Bluegrass 2020,” says Scott Vestal. “We are very excited about everybody hearing this and look forward to getting it out. It was very invigorating and a lot of fun doing the record.” 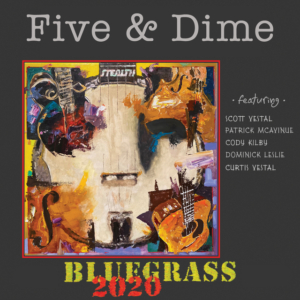 The lead single “Five & Dime” is the perfect example of what to expect on the project. Written by Patrick McAvinue, the track is a fast-paced fiddle-driven tune which showcases each member's world-class musicianship. The artwork for the new album also is heavily inspired by the original series covers and was hand-painted by renowned artist C.W. Mundy. Set for release on June 26, the collection includes 10 new instrumentals. The sound varies from track-to-track, capturing a more traditional sound, while others channel a more progressive approach. Each instrumentalist shows their individual and unique styles, which enables them to capture the essence of the original 1995 album, with a 2020 spin. In addition to all-new material, also featured on the record are fresh takes on tracks made famous by Bluegrass legends Bill Monroe and Earl Scruggs. On the newer side, multiple tracks were penned by Bluegrass 2020 members Scott Vestal and Patrick McAvinue, plus a very special track written by Moon Mullican. The series first turned heads with Bluegrass 1995, which was the IBMA winner for “Recorded Event of the Year.” The artists who appeared on each year’s release were representative of who Vestal was doing active sessions with. It was that inspiration and connectivity that made it possible for them to make memorable recordings. Bringing in Patrick McAvinue (Dailey & Vincent), Cody Kilby (Ricky Skaggs), Dominick Leslie (Hawktail), and brother Curtis Vestal is no coincidence. They are all often recording at Vestal’s Digital Underground studio outside of Nashville.