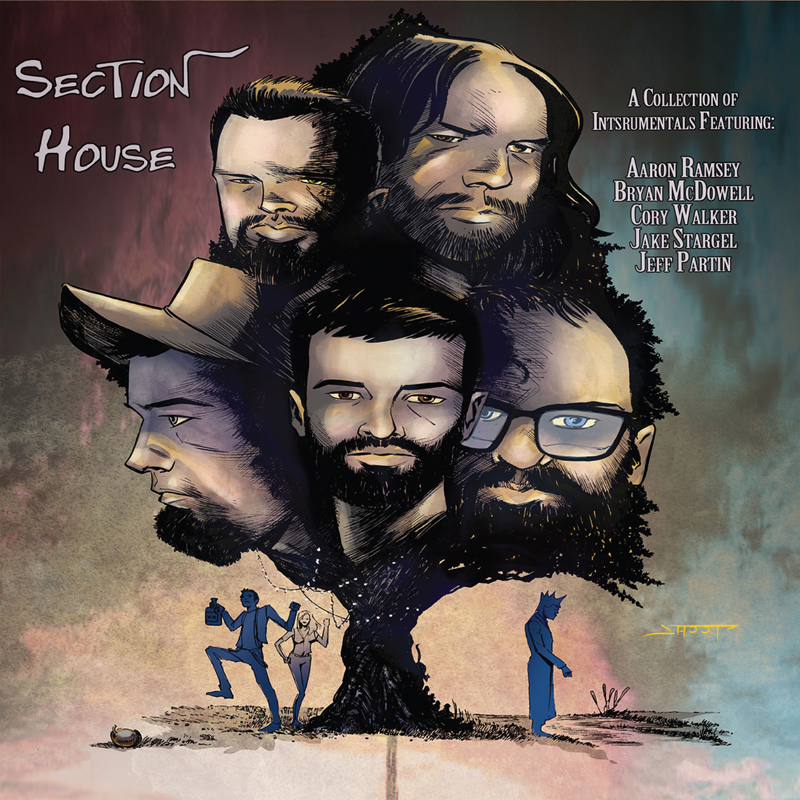 Mountain Fever Records is proud to announce Section House – A Collection of Instrumentals is available to radio programmers today. The album will be released March 25th but is available for preorder now. Section House – A Collection of Instrumentals is an offering from an exceptional group of super-pickers who, despite being relatively young in age, have already become household names among the who’s who of bluegrass musicians. Section House includes Aaron Ramsey (mandolin), Bryan McDowell (fiddle), Cory Walker (banjo), Jake Stargel (guitar), and Jeff Partin (bass and resophonic guitar).

Aaron Ramsey has nearly 20 years of experience in performing and recording music having started at an early age with various regional groups from North Carolina such as Damascus Road and The Linville Ridge Band. In 2006, he became a member of Randy Kohrs and The Lites, and in 2007 he became the mandolin player for Mountain Heart. Over the past eight years, he has expanded his recording experience, both as a studio musician and an engineer of recordings and has also begun producing many recordings, via his work at Mountain Fever Recording Studio. From straight-ahead bluegrass to more progressive stylings, Ramsey strives to keep his creative juices flowing, while demonstrating his respect for more traditional musical styles.

Raised in western North Carolina, Bryan McDowell took up fiddle at an early age and developed his craft performing with his sister and family at regional venues. During his teenage years, he became proficient on several other instruments. In 2009 at the age of 17, he turned from performing to competing and over the following two years, amassed 21 first place finishes at many prestigious acoustic competitions and pulled off several festival “sweeps.” In January 2012, he became  a member of the Claire Lynch Band, and since relocating to Nashville in 2013, has also enjoyed working with Sierra Hull, Ron Block, Alison Brown, Bryan Sutton, the Tony Rice Unit, Josh Turner, and many others.

Cory Walker is one of the most exciting young banjo players on the scene today, making many national television appearances with artists such as Keith Urban, Earl Scruggs, Ricky Skaggs, and Kix Brooks. He has played the Grand Ole Opry dozens of times both as a featured performed alongside his brother Jarrod Walker, and with various acts including Mountain Heart, Sierra Hull, and Ricky Skaggs. In 2014, he received an IBMA Momentum Award for Instrumentalist of the Year, an honor given to two young musicians annually who show great promise on their respective instrument.

At 24 years young, Jake Stargel is a rising figure in the acoustic music scene and has already worked with an impressive array of artists including the Greencards, Mountain Heart, Ricky Skaggs, and Sierra Hull. In 2005, he won the Georgia State Flatpicking contest which consequently led to him landing his first gig with the progressive acoustic ensemble, the Lovell Sisters (Larkin Poe). In 2014, Stargel was also awarded the IBMA’s Momentum Award for Instrumentalist of the Year.  Having performed nationally and internationally on world-class stages, he has in a few years accomplished more than most musicians hope to achieve in a lifetime. Currently, you can catch him performing with Mike Snider, Missy Raines and the New Hip and Bradford Lee Folk.

Jeff Partin began playing electric bass at the age of four and was immediately bitten by the music bug. A few years later, he began learning guitar and at the age of 13, won the Georgia State Flatpicking Championship which led to the chance to perform on the Grand Ole Opry. Fresh out of high school, he joined Volume Five where he performed across the country for the next three years which opened the door to many opportunities including filling in for the great Tony Rice Unit. These days, he can be found hitting the stage with Mountain Heart, a spot he’s held for the last two years.

When musicians this talented join together for a project this unique, the artwork surrounding the physical CD must be equally special. Marlin Shoop was commissioned to create the artwork for the project and with good reason. Shoop attended the Joe Kubert’s School of Cartoon and Graphic Art and Savannah College of Art and Design. His credentials include Zenescope, Archie Comics, Penny Farthing Press, Devil’s Due Publishing, Moonstone Image Comics, Comic’s Buyer’s Guide, Topps and Upper Deck. He was also part of the concept team for Icarus Studios/Fallen Earth and the TabbApp game from Heroclix for the iPad and Droid tablets. Currently, he works on the graphic novel series LARP! from Dark Horse Comics. Clearly, his creative genius was put to task for Section House and he delivered with art that is certainly worthy of future IBMA Graphics accolades.

Section House – A Collection of Instrumentals has all the makings of becoming a landmark album and certainly a favorite with fans of the up-and-coming musicians who are torch-bearers for the tradition of bluegrass as well as innovators of a new fresh sound. As Aaron Ramsey stated, “The soul purpose of this record is to share our mutual admiration for each other and hopefully translate honesty into musical form.”