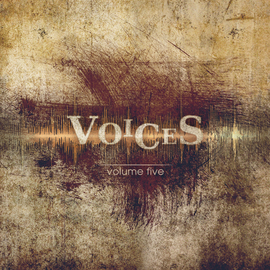 Mountain Fever Records announces the upcoming release of Voices from Volume Five, which will be in stores on Jan. 20, 2015 but is available now for preorder at iTunes.

Founded in early 2008 by vocalist and fiddle player Glen Harrell, Volume Five includes the talents of Harry Clark (Mandolin & Vocals), Chris Williamson (Bass & Vocals), Patton Wages (Banjo & Vocals,) and Colby Laney (Guitar & Vocals.)  These five musicians together truly blend into a band with staying power. “When I put this group together, I knew the style of music I wanted us to play and the goals I wanted to achieve,” stated Harrell. “It was just a matter of finding the right guys who wanted to create their own identity in the industry. I didn’t just want us to be another band that moves onto the scene and is gone in a few years, but one that would have a unique sound that players and listeners would remember for many years to come – one that sounded like no other band in the business.”

Volume Five’s touring schedule has afforded them the benefit of playing with numerous artists over the years, many of whom have become fans. Buddy Melton of Balsam Range says, “What defines a great band? Superior musicianship, impeccable singing, moving song selections…Volume Five has all the above and more…Extremely talented, yet humble and genuinely real people. Volume Five has a magical quality about them that will undoubtedly make a lasting impression in the world of acoustic music.”

Volume Five has had great success with their previous releases including their first, Down In a Cell and their second release, Children of the Mountains, which garnered the group their first #1 song, “Anywhere is Home Again.” With their third album, Run, they achieved significant Bluegrass Today chart success appearing almost every week of 2013. “Rich Man’s Daughter” was the first single from the album which went to #1 only three weeks after it was released. Several other songs from the album climbed as high as #2 and many weeks they have had as many as four songs from the album appearing on the chart at one time.

2014 also proved to be a stellar year for the band. On the heels of a their well-received southern-gospel release, The Day We Learn to Fly, the band earned two IBMA nominations for Emerging Artist of the Year and IBMA Gospel Recorded Performance of the Year for the album’s title cut.

Voices will be the band’s fifth album and features 12 tracks of carefully selected songs, showcasing the many facets of musical tastes that come from within the decidedly bluegrass ensemble—traditional, classic, and on-the-edge—this project covers it all.