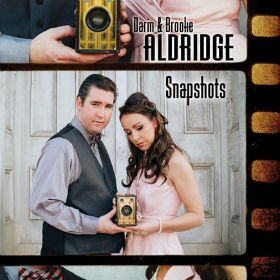 In spite of the worst snow and ice storm the southern states have seen in decades, Darin and Brooke Aldridge have debuted at No. 8 on the Billboard Bluegrass Albums Chart with their sixth new release, Snapshots.

A flurry of promotional activity had been planned for release week, but instead a flurry of ice and snow found the Aldridge’s and their band stranded somewhere between Nashville and Asheville on I-40 when the storm hit. They were forced to cancel a number of appearances and events, including the world renowned Station Inn and WSM Radio.

Still, fans clearly flocked to the album, which includes an intimate slice-of-life songs that have become the hallmark of Darin & Brooke Aldridge.

“Combining tradition and innovation, Darin & Brooke bring together the best of both worlds with undeniably strong musicianship and vocals alongside edgy melodies and song selection meant for a new and wider audience.” – Dan Harr, Music News Nashville

As The South begins to thaw, the Darin and Brooke Aldridge band continue on with its 2015 tour.