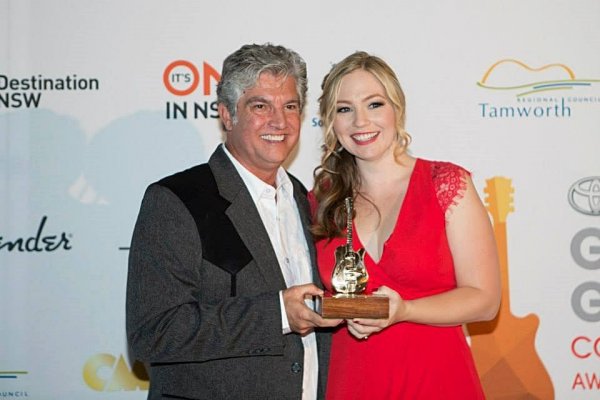 Australia’s country music industry celebrated its pinnacle night in Tamworth with the 2015 Australian Country Music Awards. A lifelong dream came true for Pisgah Ridge recording artist, Kristy Cox when her song “One Heartbreak Away” was honored with the Bluegrass Recording of the YearGolden Guitar. The song appears on Kristy’s album, LIVING FOR THE MOMENT.

The new award was added to the list of Australian Country Music Awards this year in response to the growth of the bluegrass genre in Australia. The award was presented by alt-country singer Lachlan Bryan and Nashville songwriter, Jerry Salley. The latter also happens to be Kristy’s producer. Referred to by Billboard Magazine as “One of Music Row’s greatest veteran tunesmiths,” Jerry Salley has had over 340 songs recorded in his multi-award winning career, and was named the 2003 “SESAC Country Music Songwriter of the Year.”

“I’m still not sure that this is all real,” Kristy says. “Since I was a child, I have wanted to have one of these [Golden Guitar Awards] on my bedside table! To be acknowledged with the first ever Bluegrass Golden Guitar [in this category] and have it presented by my longtime friend and producer, Jerry Salley, just made it that bit more special. We have made history! I can’t thank the industry here at home enough for their ongoing support, and my label Pisgah Ridge for believing in me and making this album with us” – Kristy Cox

Kristy was also asked to present two awards at the program and perform with a stellar lineup of Australia’s best in the program finale.