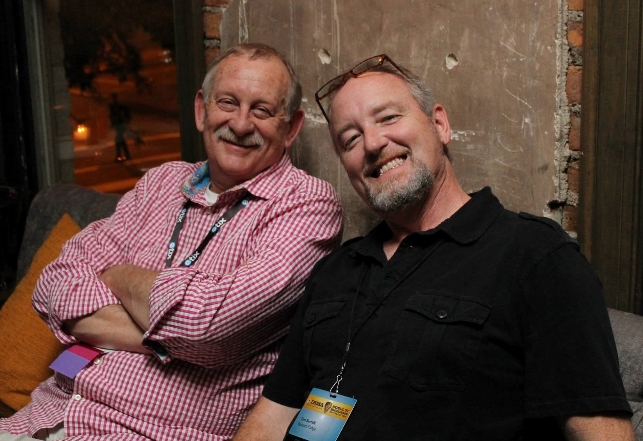 The Effect of Awards on Careers

Pictured at an IBMA Awards after-party are Mickey Gamble (left), president of Crossroads/Mountain Home Music Company of Arden NC, and Tim Surrett of the multi-award winning band Balsam Range. Surrett is the original founder of the Mountain Home label.

Artists on the Mountain Home Music Company label garnered the greatest number of nominations of any record label in the recent 2014 IBMA (International Bluegrass Music Association) Awards. When the awards were handed out, Mountain Home artists walked away with six impressive honors.

Balsam Range was named both Vocal Group and Entertainer of the Year with singer/fiddler Buddy Melton named Male Vocalist of the Year and Tim Surrett honored with the Mentor Award. Adam Steffey of The Boxcars won the Mandolin Player award. With its second album released earlier this year, the vibrant young group, Flatt Lonesome was named Emerging Artist of the Year. All in all, a very good day for the ambitious record label based in North Carolina’s unassuming community of Arden.

So, aside from the recognition and a moment in the spotlight, what can awards mean to an artist’s career or to a record label? What is the effect on the business of the music business?

“First, I’ve got to say that any nomination or award is an honor. Just think of the number of people out there making music, and then to be selected for any kind of recognition, well, that’s pretty special,” says Tim Surrett of Balsam Range and Mountain Home Music Company. “Beyond that, awards can enhance an artist’s image and raise awareness both within and outside of the genre. That kind of recognition provides talking points for managers, agents and publicists who represent the artist. Additionally, songwriters and publishers are eager to pitch great songs to award-winning artists.”

“The result is multi-tiered. Awards can have a positive effect on the way everyone connected with the winner conducts business: artists, songwriters, publishers, labels and agents. A high profile nomination or award, especially something that is widely covered by the media, can boost sales and increase tour dates for the artist,” Gamble says.

“There is a level of credibility that comes with having award winners on the label that enhances the overall reputation of the label, making it easier to attract other promising or very accomplished artists to the roster, and that means we get to do more of what we love most: working with talented artists and supporting their creation of great music,” Gamble notes.

Many great bands are competing for a finite number of quality tour dates. Award recognition can pave the way to the stage of venues that might have previously been a tough sell.

From the agent’s perspective, Mike Drudge of Class Act Entertainment, (pictured, Drudge books act, including Balsam Range and The Boxcars), adds his thoughts on the effect of awards on the business of music.

“Awards are always great talking points, and the more high profile the award is, the more it adds to the ‘marquee value’ of an act. A major award, like Balsam Range’s 2014 Entertainer of the Year nod, adds a layer of legitimacy, if you will, particularly to those outside of Bluegrass. Similarly, when The Boxcars were nominated for a Grammy, it was an instant door opener to presenters and venues that may have limited familiarity with Bluegrass artists, as if to say, ‘Well, if they were nominated for a Grammy, they must be good!’”

“In my experience,” Drudge adds, “awards that result from a vote by peers carry more weight than fan-voted awards. Both the Grammys and IBMA Awards are voted on by peers in the industry – folks ‘in the know’ – so when someone from the outside looking in sees an act recognized by peers, it means a lot.”