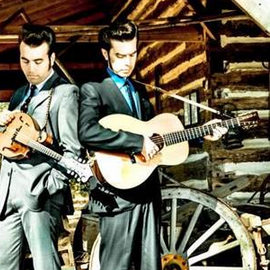 The Malpass Brothers have signed an exclusive booking agreement with Class Act Entertainment of Nashville.

The good old days are back again, breathed to life by these two talented brothers from Goldsboro, NC who’ve opened several recent tours for Merle Haggard.

They’ve got the sound, and they’ve got the look. Christopher and Taylor Malpass are unabashed and shameless purveyors of traditional music, reminiscent of the classic country, rockabilly and honky-tonk songs of decades past. They perform the music of artists who inspired them, including Hank Williams, Sr., Merle Haggard, Johnny Cash, Lefty Frizzell, Waylon Jennings, Elvis and The Louvin Brothers. They also write and perform original music that harkens back to those styles.

“Their show is genuine. Their music is genuine. There’s not a note of shtick here,” says Mike Drudge, President of Class Act Entertainment. “The Malpass Brothers are highly entertaining, and they are sincere fans of the music they honor with their musicianship and showmanship. I’m thrilled to have them on our roster.”

The Malpass Brothers are signed to Asheville-based record label, Organic Records. They are currently in the studio putting the final touches on a new recording to be released this Spring. The album is being produced by Bluegrass legend and IBMA Hall of Fame member Doyle Lawson.

“My brother Taylor and I do the type of music we do because this music speaks to us, and speaks to the souls of its listeners,” said Chris Malpass. “For us, traditional country music is the ‘real deal.’”

With more than 20 years in entertainment booking, Class Act Entertainment represents some of the top names in acoustic music. The Class Act roster currently includes the hot Bluegrass, Roots and Americana talents of IBMA Entertainer of the Year and Vocal Group of the Year, Balsam Range, and Grammy-nominated, multi-award winning band, The Boxcars.

Along with Class Act Entertainment, The Malpass Brothers have announced their 2015 tour schedule, with new dates continuing to be added. For additional dates, visit www.themalpassbrothers.com