The W.I.N. (Worship in Nassau) Experience

Earnest Pugh has experienced success he only dreamed of just a few short years ago. With the release of the project, Rain On Us, and its title tune, Earnest Pugh was heard on Gospel radio stations nationwide and was catapulted to super stardom in the Gospel music industry. His smash hit single “Rain On Us” escalated to the #1 position on Billboard’s Top Gospel Singles Radio Chart and became the sixth most popular song of 2010. The second single, “The Great I Am”, helped the CD, which featured Gospel icons Vanessa Bell Armstrong and Richard Smallwood, to peak at #2 on the Billboard Top Gospel Albums Chart. Now after the whirlwind of exposure, this En Sound Male Vocalist of the Year and Independent Music Award Winner for Gospel Album of the Year is getting ready to do it all over again with the upcoming album 'The W.I.N. (Worship in Nassau) Experience'. 1. Introduction by Lonnie Hunter feat. Lonnie Hunter 2. I Praise Your Name 3. Everybody Lift Him 4. We Praise You 5. In Your Presence 6. More Of You 7. The Lord Is Here 8. All Things Through Christ feat. Rance Allen 9. Olanda Draper Tribute Medley feat. Angel Bigelow, LeJuene Thompson & Shirley Caesar 10. Just When I Need Him Most feat. Michele Prather 11. Step Right In feat. Michele Prather 12. I Believe You Most feat. J Moss 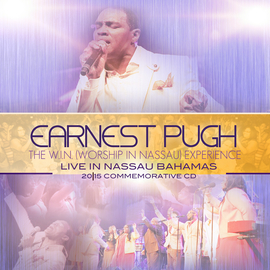